If the road to hell is paved with good intentions, then good intentions are also sending “Little Demon” to TV’s fiery pit of no return. Over its first three episodes, the adult animated sitcom created and written by Darcy Fowler, Seth Kirschner, and Kieran Valla is high on crude jokes — with nudity, bloodshed, and cringe comedy aplenty — but low on ingenuity, taking a novel premise and steering it toward conventionality.

In a crowded landscape of TV-MA animation (unless you’re working for HBO Max), simply talking the filthy talk isn’t enough, and the DeVito family’s fictional foray into hell needs more pep in its step if it’s going to avoid damnation.

Lucy DeVito (daughter of Danny) voices Chrissy, the eponymous spawn of a wine-carrying, cardigan-wearing Satan, played by Danny DeVito (father of Lucy) — only Chrissy doesn’t know her father is a fallen angel; she thinks he’s been absent from her life for a very good reason: He’s dead. That’s what her mother told her anyway. For the last 13 years, Laura (Aubrey Plaza, no relation to the DeVito family) has kept Chrissy (birth name: Christina) hidden, moving from small town to small town in the hopes of staying off the Devil’s radar.

It’s never fully explained why a low-key existence in low-population communities helps Laura and Chrissy avoid the all-seeing eye of Satan (or is that only Sauron?), but it’s easy to believe Laura knows what she’s doing. The tatted-up and totally ripped single mama has been preparing for her daughter’s father to come back into their life at some point — studying demonic spells, taking educational trips to other realms, and generally boning up on how to best defend the Antichrist from Satan — and turns out, that time is now.

On the first day at her new school (her 14th in 10 years), Chrissy immediately meets a nice boy named Bennigan (Eugene Cordero), but that positive introduction is soon overshadowed when she gets her first period, retreats to a restroom, and gets threatened by a couple of bullies who want to post a video of her bloody jeans online. But when all hope seems lost, Chrissy’s eyes turn black, her joints unhinge and, with a few demonic growls, the two punks are brutally eviscerated into gloppy pools of blood. To top it all off, a beam of red light shoots out of Chrissy’s body, forming a black hole in the sky above town. Cows, trash, people’s skin — it’s all getting sucked into the void, while Laura whisks Chrissy away before her bad ol’ dad shows up. 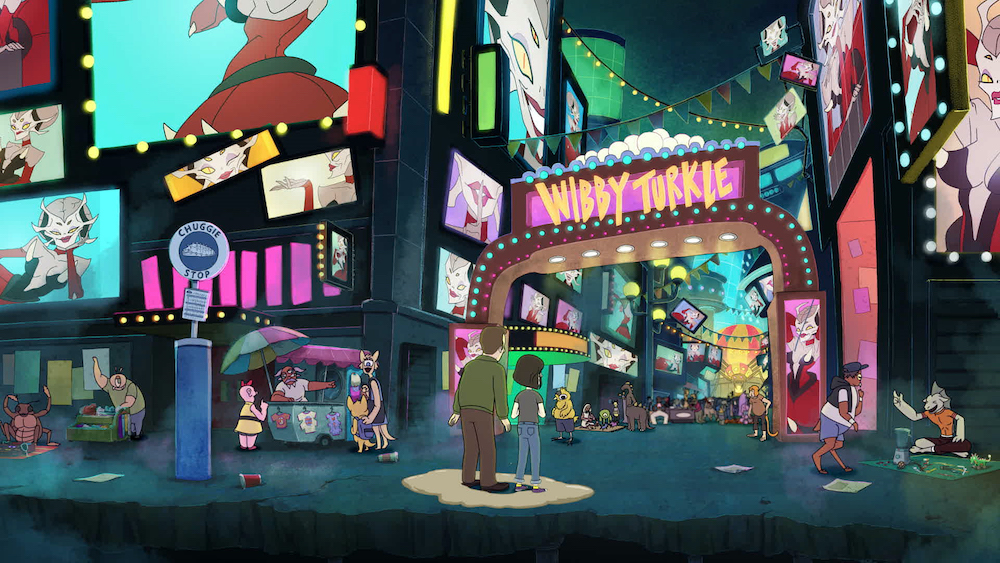 Too late. Despite Laura’s best efforts, Chrissy’s menstruation makes like a homing beacon for Satan, and with very little effort, he’s carried her away to — well, not Hell. Like a sad divorcee still living in a month-by-month motel, Satan has been residing in “the metaphysical realm” due to cosmic laws he can’t break. But with Chrissy’s help, he can fold all the “unearthly realms” into one lawless universe — “like an anarchistic, socialist utopia.”

His plan is a little fuzzy while he’s focused on courting Chrissy’s favor, but Laura isn’t so easily pushed aside. The two parents are soon battling over their daughter like “The War of the Roses” with magic spells, until Chrissy forces them into a shared custody agreement: She wants to get to know her dad, but she trusts her mom in not trusting him. Not yet, anyway.

Only three episodes into a series, it’s impossible to judge exactly where things are headed, or the dynamic range of certain characters. But “Little Demon” is saddled with a few warning signs as bright red as Chrissy’s sky-opening flash of light. One is a wackadoo moral compass. When Chrissy discovers her powers and murders two older classmates, there’s no regret or horror on her part.

Bennigan simply describes the experience as “cathartic,” and the scene’s main emotional takeaway is relief; he and Chrissy can still be friends, even though she’s a demonic killer. So far, the series sports the general attitude that so long as one of the family members does it, it’s OK — which works for its button-pushing comedic extremes, but does little to instill any actual investment in Chrissy’s new arrangement. Even torn between two influential parents — a literal devil on one shoulder, and a kind of avenging angel on the other — Chrissy’s soul seems just fine.

Though there’s very little personally at stake for our main character, “Little Demon’s” most glaring red flag is Satan himself. Despite encouraging his demon hordes to fight to the death for his amusement and spearheading bro nights centered around boiling baby heads, the Lord of the Underworld doesn’t appear to be the series’ antagonist.

When he finds out a rival ghoul is bothering his daughter, he quips, “I got this weird feeling. What is that? Concern?” before dismissing the thought as a misdiagnosis. (“I think I have to take a shit.”) Satan will lie to his daughter and antagonize her mother, but his intentions aren’t actually evil. Instead, they fit the bill for another “bad dad” redemption arc, where a selfish, lazy, or otherwise uncaring father gets a second chance to make things right.

That’s all well and good. TV is full of long-running sitcoms centered around dads who can’t help but screw up (“The Simpsons” and “Family Guy” chief among them), but it’s a disappointing choice for a show that’s primary hook is the opposite of familiarity. This dad is the literal Devil. Why not let him be bad — really bad — at least for a little while? Why must the pilot be so quick to see Laura give in and let Satan — the devil she’s been hiding her daughter from and preparing to fight for over a decade — share custody?

Why does “Little Demon” have to conform so quickly to templates established elsewhere? If the answer is, “to embody them before satirizing them” I’ll tune back in, but the wannabe edgy comedy is already a little too comfortable with its three-person family dynamic. Seeing Satan escort Chrissy through an underworld filled with floating bodies that fart bubbles and game shows designed to satisfy the bloodlust of actual hellhounds is diverting, sure, but it’s far less compelling than less-conforming options.

Episodes move at a rapid clip, eager to trade clarifying exposition for extra gags, and some details prove memorably clever (a runner about wicker furniture) or amusingly dumb. (The Devil’s bartender is a snake with arms, who’s simply named Snake With Arms.)

The guest list is stacked, featuring everyone from affable vets like Pamela Adlon and Sam Richardson to bonafide legends like Mel Brooks and Arnold Schwarzenegger. Laura, easily the shining star of the series regulars, also gets the best partner in comedy: Darlene (voiced by the great Lennon Parham), the next-door neighbor with more of an edge than her wine nights let on.

With a strong cast behind it and plenty of time ahead, “Little Demon” could forge an imaginative reputation through the fires of trial and error. But in order to stand out, it needs to get off the highway and carve its own path to hell — leaving good intentions, and conventions, in the dust.

“Little Demon” premieres Thursday, August 25 at 10 p.m. ET on FXX with two episodes. New episodes will be released weekly and available on Hulu the next day.

Little Demon: next episode, cast, plot and everything we know about the animated comedy

Satan’s a proud Girl Dad in the newest FX animated series Little Demon. Rick and Morty co-creator Dan Harmon joined forces with executive producer Danny DeVito to bring the story of the devil and his daughter to life.

“It’s a great opportunity to play a demonic character. I never get to do that,” DeVito told an audience(opens in new tab) at the show’s San Diego Comic-Con panel. “I think you’re gonna find that in the show Satan is really a good guy. The guy was deprived of his spawn — who is a girl — but of course, I thought it was gonna be a boy. But the future is female.”

Here’s everything we know about Little Demon.

How to watch Little Demon

Little Demon is an animated original series that debuted on FXX on August 25. The show airs at 10 pm ET/PT with new episodes airing weekly. Episodes can be streamed on Hulu the following day.

There’s no release date for the UK just yet; we’ll post it here as soon as one is available.

Like many late-night adult animated series on FX, Little Demons is raunchy and wild. You never know what’s going to happen next as Satan tries to bond with his teenage daughter while trying to plan his global takeover.

Who is in the Little Demon cast?

“I got to be there when he recorded,” DeVito gushed at Comic-Con. “He’s wonderful in Little Demon; he’s very strong. We’re good buddies, we’re very, very close. We’re thrilled he will be part of our show. Sometimes you gotta lean on your friends to appear in your shows.”

What is Little Demon about?

Here’s the official synopsis of Little Demon from FX:

“In FX’s Little Demon, an animated comedy featuring the voices of Danny DeVito and Aubrey Plaza, it has been 13 years since being impregnated by Satan and a reluctant mother, Laura, and her Antichrist daughter, Chrissy, attempt to live an ordinary life in Delaware. However, the two are constantly thwarted by monstrous forces, including Satan, who yearns for custody of his daughter’s soul.”

The series was created by Darcy Fowler, Seth Kirschner and Kirean Valla.

Is there a trailer for Little Demon?

The official trailer for Little Demon sets the stage for Chrissy to find out her true identity as the Antichrist. As if junior high wasn’t already complicated….

From the co-creator of Rick and Morty comes the new animated comedy, FX’s Little Demon. Growing up can be hella annoying, especially when your father is Satan himself. Watch the OFFICIAL TRAILER starring Aubrey Plaza, Lucy DeVito, and Danny DeVito. Premieres 8/25. Stream on Hulu. pic.twitter.com/BThtDHYZiiJuly 28, 2022

FX released a sneak peek of Little Demon at Comic-Con. The preview offers a look at the moment when Satan meets his daughter for the first time. She’s upset that he’s been MIA her whole life and he has to explain that cosmic forces kept him from seeing her. Now that he’s found her, though, he has big plans for their future together.

Watch the sneak peek directly below.

How to watch Little Demon

Little Demon airs on FXX and streams the next day on Hulu. If you’ve cut the cord on cable, you can catch FX and FXX on streaming platforms like Hulu with Live TV, Sling TV, YouTube TV and FuboTV.

Once we have a premiere date for Little Demon in the UK we’ll let you know how and where to watch it.