Cristina Kirchner, How She Survived an Attempt to Murder Buenos Aires — A man attempted to shoot Argentine Vice President Cristina Kirchner near her home in Buenos Aires on Thursday, a shocking incident that prompted a wave of sympathy from Latin American leaders.

“Cristina remains alive, because for a reason that has not yet been technically confirmed, the gun which contained five bullets did not fire despite the trigger having been pulled,” Argentina’s President Alberto Fernandez said in an address to the nation.

“This is the most serious event that has happened since we restored democracy” in 1983, Fernandez said.

Video of the incident showed the man pointing a handgun at Kirchner’s head at close range.

Kirchner was the country’s leader from 2007 to 2015 and is now facing corruption charges.

“I saw this arm come up over my shoulder behind me with a gun, and with people around me, he was subdued,” a supporter of Kirchner, who did not give his name, told AFP.

Security Minister Anibal Fernandez said a suspect had been arrested on Thursday night but investigators still needed to examine the crime scene and circumstances surrounding the incident.

Local media reported that the suspect was a 35-year-old Brazilian national.

President Fernandez declared Friday a public holiday to allow people to “express themselves in defense of the life of democracy and in solidarity with our vice president.”

“We send our solidarity to Vice President Cristina Kirchner in the face of the attack against her life,” he wrote. “We strenuously reject this act that sought to destabilize the peace of the brotherly Argentine people. The great homeland is with you, comrade!”

“The assassination attempt… deserves the repudiation and condemnation of the entire continent,” he said. “The path will always be the debate of ideas and dialogue, never weapons or violence.”

Within the country, opposition party Together for Change condemned the attempted attack on Kirchner and called for a full investigation.

“My absolute repudiation of the attack suffered by Cristina Kirchner, who fortunately was not injured,” tweeted opposition leader Mauricio Macri, who was president after Kirchner. “This very serious act requires an immediate and deep investigation by prosecutors and security forces.”

Luiz Inacio Lula da Silva, Brazil’s former president now locked in a fierce election battle, also slammed Kirchner’s attacker as “a fascist criminal who does not know how to respect differences and diversity.”

Kirchner, a lawyer by training who succeeded her late husband, Nestor Kirchner, as president, stands accused of fraudulently awarding public works contracts in her political stronghold of Patagonia.

Government prosecutors have accused her of defrauding the state out of an estimated $1 billion and are seeking a prison sentence of 12 years and a lifetime ban from politics.

Hundreds of activists have gathered in recent days in front of her home to protest the claims.

“Nothing, absolutely nothing that they have said was proven,” Kirchner said last week.

The verdict in her case is expected at the end of the year.

She is president of the country’s Senate and enjoys parliamentary immunity, granting her some legal protection. Even if convicted she would not go to prison unless her sentence was ratified by the country’s Supreme Court, or if she loses her Senate seat at the next elections at the end of 2023.

Explainer: How the attack on Argentine VP Cristina Kirchner unfolded

The attack happened outside her Buenos Aires home where hundreds of supporters have gathered in recent days to voice their backing for the former two-term president. She is facing corruption allegations that she denies, with prosecutors calling for a lengthy jail term.

WHO IS THE SUSPECTED ATTACKER?

A suspect was arrested who has been named by federal police as Fernando Andres Sabag Montiel, a 35-year-old Brazilian, who had previously been cited for possession of a knife last year.

Local newspaper La Nacion, citing police sources, said that Montiel had been working as a driver and renting rooms in the Villa Zagala neighborhood of Buenos Aires. Police found 100 bullets when they raided the property, the newspaper said.

The owner of the property where Montiel was renting, Sergio Paroldi, told La Nacion that Montiel had appeared normal.

“He didn’t seem crazy in the slightest. He was always very polite. He called me ‘Sir’, always with respect,” he said.

Fernandez de Kirchner has long been a divisive figure in Argentina, but police have not given a possible motive for the attack.

HOW DID THE ATTACK TAKE PLACE?

The attack happened around 9pm local time (0000 GMT) on Thursday as Fernandez de Kirchner was arriving back at her home, police said. Police said five people had chased the suspect, accusing him of attempting to kill the vice president.

The attacker used an Argentine-made 32-caliber Bersa 380 pistol, according to police. President Alberto Fernandez said that the gun had been loaded.

“A man pointed a gun at her head and fired. Cristina’s alive for a technical reason as yet unclear. The gun, which had five bullets in it, did not go off even though the trigger was pulled,” President Fernandez said.

The vice president was surrounded by security personnel, but interacting closely with crowds of supporters who have daily gathered near her home. The attacker was able to push through the crowd, getting within feet of Fernandez de Kirchner and waving the gun in her face, video of the incident shows.

Miguel Angel Pichetto, a prominent lawmaker, called for a probe into how the attacker was able to approach.

“There needs to be an investigation into how this subject got so close. What happened to her security?” Pichetto said to local television station TN.

“You have to evaluate why she was so alone at that moment, that the person could get almost face to face.”

A man has been arrested after attempting to shoot Cristina Fernández de Kirchner, Argentina’s vice-president and former President, at point blank range outside her home in Buenos Aires on Thursday.

Video of the incident shows the vice president smiling as she walks by a crowd of people. A man in the crowd then surges forward, pointing a gun at Fernández de Kirchner’s face and apparently attempting a shot. No bullets are fired and the two-time former President flinches backward, unharmed.

The attacker was taken into custody after a few seconds of confusion and panic. 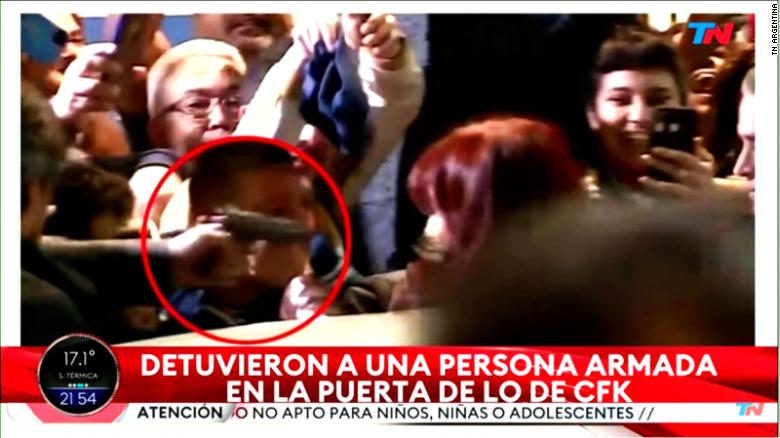 A frame from a video released by TN Argentina highlights the moment when a man pointed a weapon at Argentina Vice President Cristina Fernandez de Kirchner.

The Argentine Ministry of Security confirmed the weapon used in the incident was a .380 firearm with bullets inside.

In a televised address late Thursday, Argentina’s President Alberto Fernández said the suspect aimed a loaded gun at Fernández de Kirchner, which did not fire despite the pulled trigger.

“Cristina is still alive because — for some reason we can’t technically confirm at this moment — the weapon, which was armed with five bullets, did not shoot although the trigger was pulled,” he said.

He called the assassination attempt an attack on democracy, saying, “We must eradicate hate and violence from our media and political discourse.” He declared Friday a national holiday for the country to rally together in support of Fernández de Kirchner.

Former Argentine President Mauricio Macri also renounced the attack on Thursday, calling for an “immediate and profound clarification by the justice system and the security forces.” 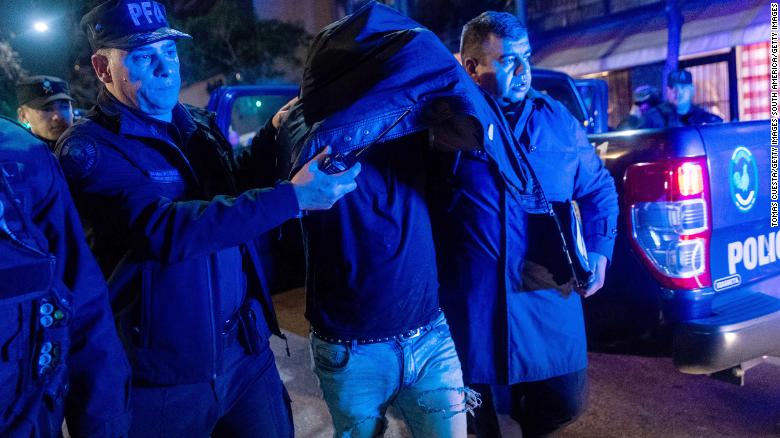 Fernández de Kirchner is among Argentina’s most prominent political figures, having served as President from 2007 to 2015, before taking office as vice president in 2019.

Her supporters have been holding rallies outside her home for several days, in response to an ongoing trial in which she is accused of corruption during her term as President.

Earlier in August, a federal prosecutor called for Fernández de Kirchner to serve a 12-year prison sentence. The court is yet to rule on the request.

Days later, her supporters clashed with police in the Argentine capital, with Télam reporting police used sticks and tear gas on protesters after a group of people knocked down fences near her home. 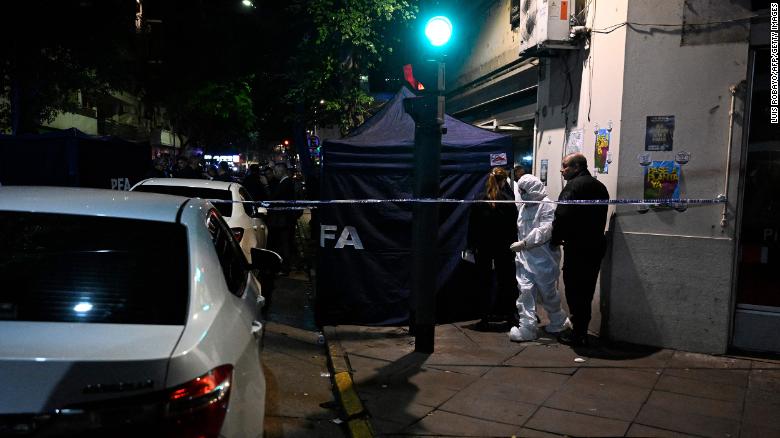 Police work behind a security cordon after a man pointed a gun at Argentine Vice-President Cristina Fernandez de Kirchner outside her residence in Buenos Aires on September 1.

During the national address on Thursday, President Fernández said he had been in touch with the judge assigned to the case to act as quickly as possible.

Governor of Buenos Aires province, Axel Kicillof, called the attack “one of the worst episodes in our history” in a Twitter post following the incident.

“Those who insist on persecuting, inciting violence and even calling for the death penalty must stop now. You cannot continue to promote hatred and violence,” Kicillof said.

Pope Francis, who is Argentinian, sent a telegram to Fernández de Kirchner to express solidarity with her. “I pray that in the dear Argentina, social harmony and respect for democratic values always prevail , against all kinds of violence and aggression,” the pontiff said.

Argentina has been roiled by demonstrations this summer, with thousands taking to the streets protesting the administration’s management of soaring inflation and corruption allegations.

In 2016 a judge indicted Fernández de Kirchner along with 11 others on charges of corruption, illicit association, and aggravated fraudulent administration, freezing $643 million of her assets.

Fernández de Kirchner was charged for allegedly directing public road works to a company called Austral Constructions during her presidency. At the time, she had criticized the investigation as being politically motivated.

She was also simultaneously on trial for another corruption case, in which she was accused of allegedly meddling with the sale of US dollars by the nation’s central bank. The case was dismissed in 2021, with the court ruling in favor of Fernández de Kirchner, according to CNN en Español.

The incident has shocked the nation, and the President declared Friday a national holiday for Argentinians to rally together in support of Fernández de Kirchner.

Football matches were also suspended in the country on Friday, according to a statement from the country’s national football organization.

Latin American leaders reacted to the news in horror, with Mexican, Cuban, Venezuelan and Chilean officials expressing their solidarity with Fernández de Kirchner. 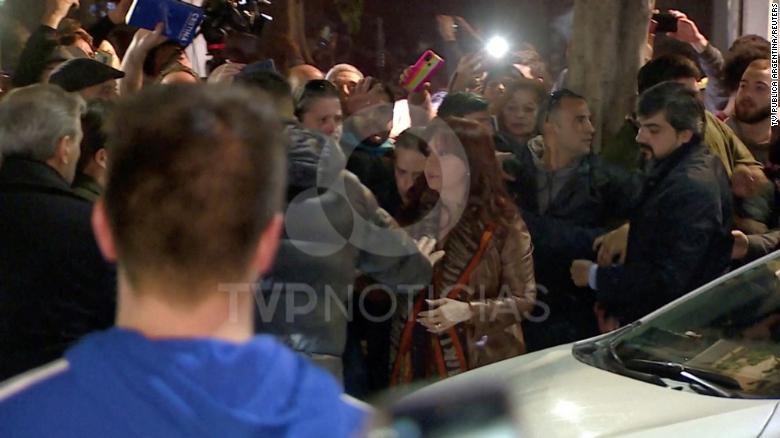 Fernandez de Kirchner is escorted away after the incident at the entrance of her home in Buenos Aires, Argentina, on September 1, 2022.

“We stand in solidarity with the Argentine Republic in the face of the assassination attempt suffered by its vice president @CFKArgentina. We join all the voices that repudiate violence and demand justice,” Paraguayan President Mario Abdo Benitez wrote in a Tweet

Brazilian presidential contender Luiz Inácio Lula da Silva described Fernández de Kirchner as “a woman who deserves the respect of every democrat in the world,” in a tweet on Friday. “This violence and political hatred that has been encouraged by some is a threat to democracy in our region. The democrats of the world will not tolerate any violence in political disagreements.”

“Violence can never, never be tolerated under any circumstances. My solidarity with Ms. Cristina Fernández and all the Argentine people in the face of the attack,” Uruguayan President Luis Lacalle Pou wrote on Twitter.