How Isaiah Likely can emerge as a threat for the Ravens While the 2021 NFL draft class had a clear choice for the top tight end, in the “unicorn” Kyle Pitts, the 2022 class had a few different options for TE1. One of those has had himself quite the preseason. Through two weeks, Isaiah Likely is emerging as quite the weapon for the Baltimore Ravens. Drafted in the fourth round by the Ravens, Likely has caught 12 passes for 144 yards and a touchdown over two preseason games. He began his NFL career with a four-reception effort against the Tennessee Titans, but his second outing is where he truly shined.

On Sunday night against the Arizona Cardinals, Likely hauled in 8 passes for 100 yards and a touchdown.

Over the course of these two games, Likely has demonstrated a few different ways where he can be a true threat for the Ravens in the passing game. While the Ravens already have one of the best tight ends in the game in Mark Andrews, Baltimore has a few different ways they can get Likely on the field at the same time. Last year, the Ravens ran 12 offensive personnel — with a pair of tight ends in the game — on nine percent of their snaps.

They also led the league in 22 personnel, running that 14% of the time.

Feel for the game 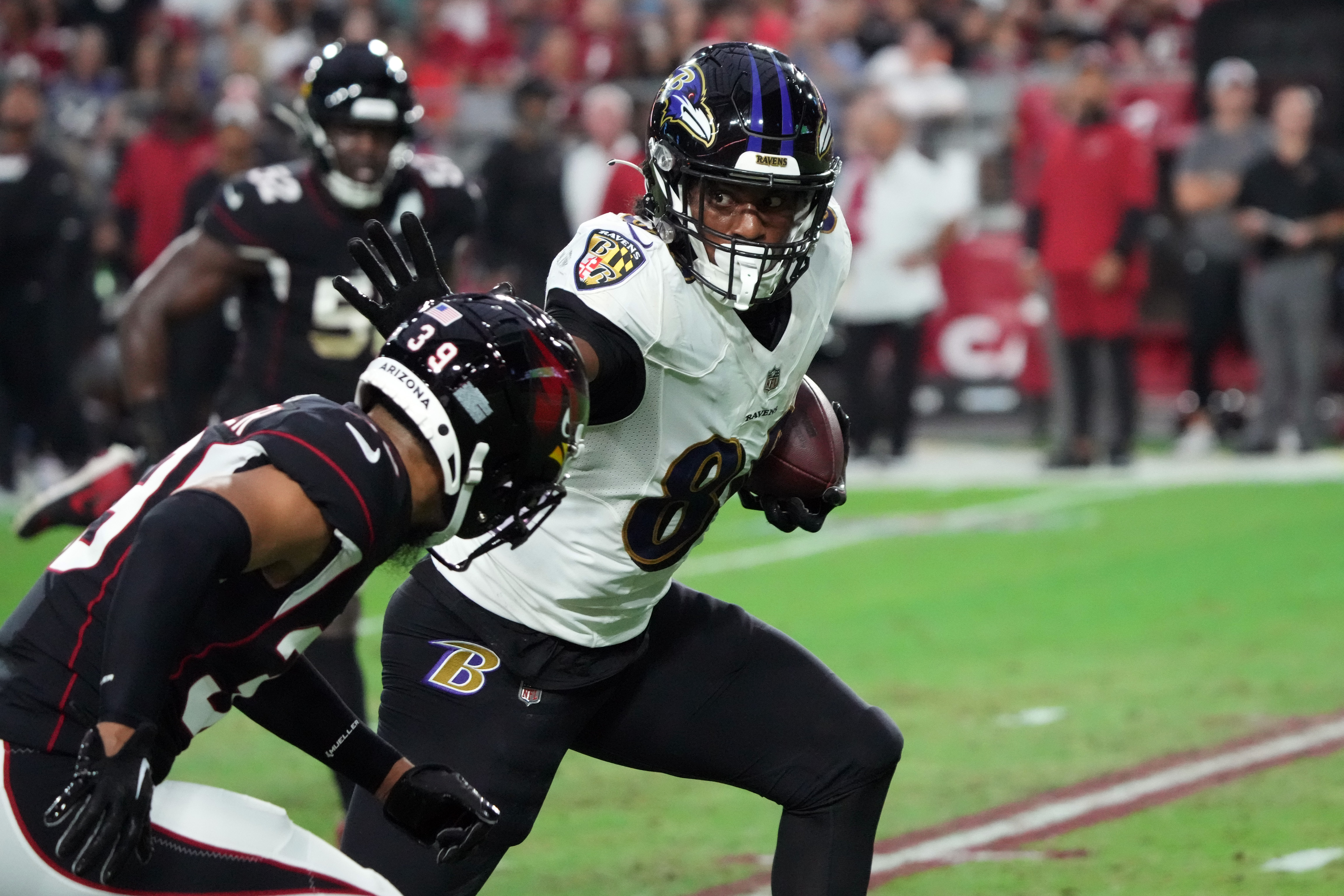 Likely’s NFL journey began in the Greater Boston League in Massachusetts, where he started his high school career at Malden High School before transferring to Everett High School for his senior year. That season, Likely caught 59 passes for 917 yards and 11 touchdowns.

I relay this not as a former player in the GBL still bitter over losing to Everett during his own senior year, but to point out that Likely did that at wide receiver.

He did not make the switch to tight end until he was on campus at Coastal Carolina, but you can see that background as a wide receiver show up in his feel for the game. Likely has the ability to work himself open against coverage, drive back to the football to guarantee completions, and help out his quarterback in the scramble drill. All traits he probably picked up during his time at receiver.

Take this catch from Sunday night against the Cardinal

Likely begins the play aligned as an in-line tight end, and runs a deep out route to the left sideline. As he looks back to pick up quarterback Tyler Huntley, he sees that his QB has spun away from pressure and broken the pocket.Likely stops on a dime, driving back towards Huntley. When the pass is thrown in his direction, he goes up over the coverage defender — safety Deionte Thompson — and makes the catch. Then, for good measure, he wrestles himself away from Thompson’s tackle attempt, picking up another 12 yards after the catch.

On this curl route against the Cardinals, Likely finds the soft spot in zone coverage, throttling down to give Huntley a clear throwing lane, and an easy completion:

Granted, this is just through two preseason games, but Likely’s background as a receiver looks to be serving him well in the NFL.

A weapon at the catch point 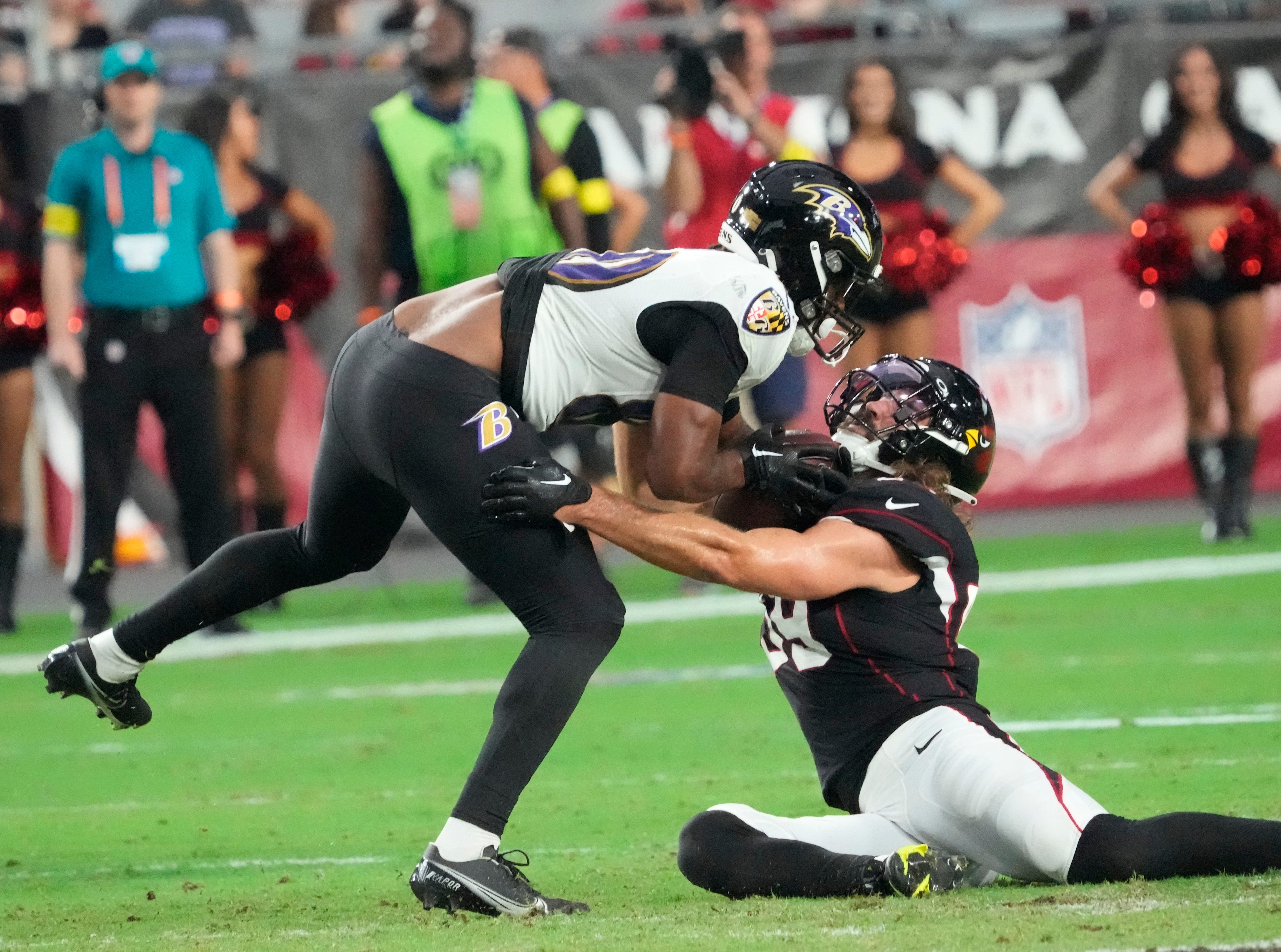 One of the things that stood out watching Likely at Coastal Carolina was how comfortable, and confident, he was at the catch point. Here is what I wrote about him last spring:

Again, it is likely due to his background as a receiver but Likely is the most comfortable player at the catch point in this class. He displays impressive strength at the catch point, is confident adjusting to off-target throws and balls placed outside of his frame, and had enough long speed to run away from defenders from all levels of the field.

That comfort level has not diminished on a bigger stage. This play is from his first NFL preseason game, against the Tennessee Titans. The Ravens dial up play-action on this play, with Likely running a crossing route, working from right to left. Huntley’s pass has some touch on it, as he needs to navigate the linebackers retreating in coverage. Watch as Likely goes up and takes this away from the dropping linebacker

On this play against the Titans, not only do you see the feel he has for the game show up, as he works himself open when Huntley breaks the pocket, but he also makes a tough adjustment to a low throw, with a defender draped on his back:

His ability to make the tough catch will serve him well, particularly in combination with his feel for the game.

A force after the catch 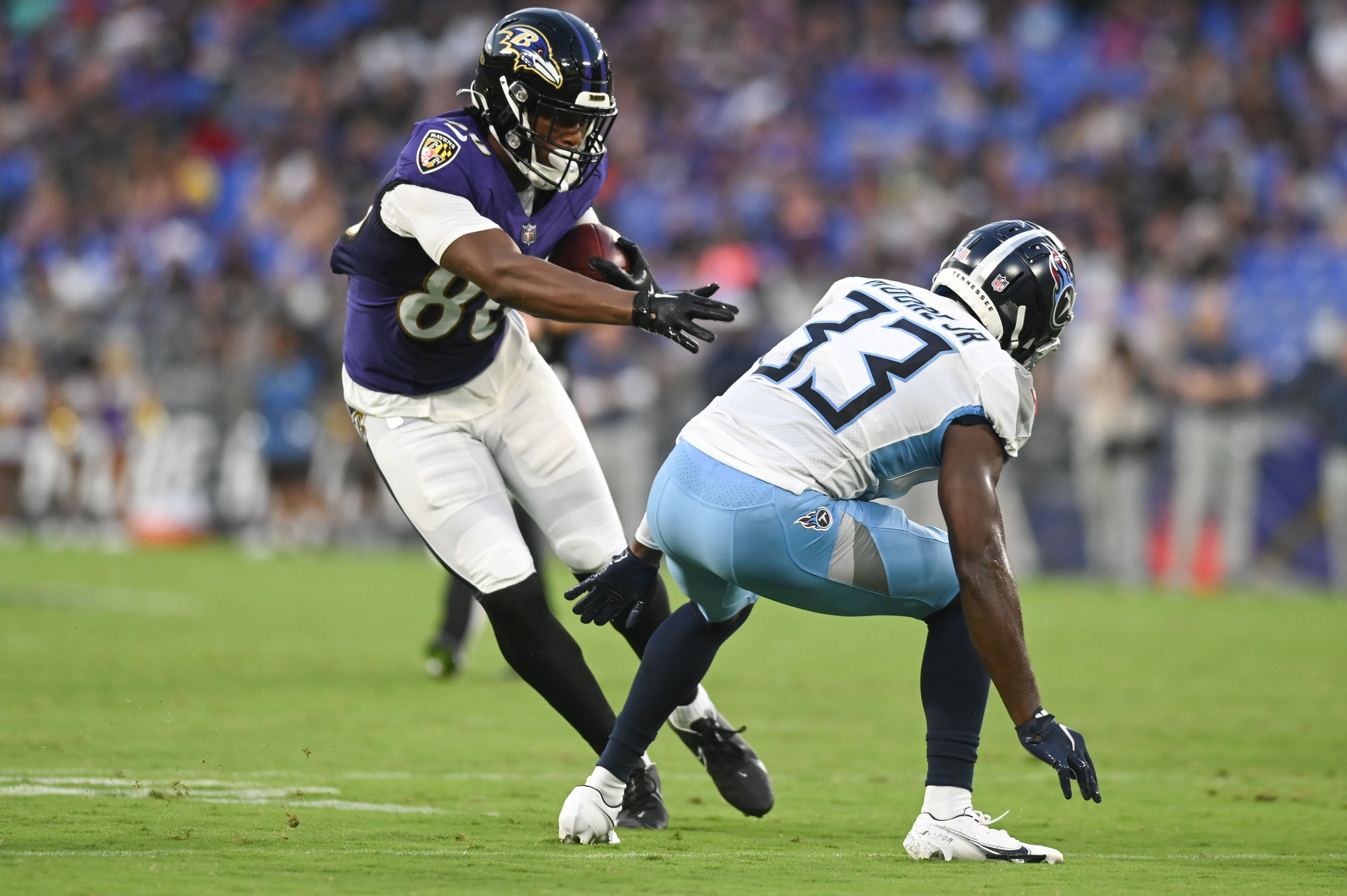 While the first two traits are impressive, what has stood out the most about his game is what he can do after the reception. Likely has been dynamic with the football in his hands through two preseason games, and his ability to turn short completions into big gains could be a critical weapon for the Ravens in the regular season.

That skill-set showed up early against the Titans, on his first reception of the preseason. After blocking on the edge he drifts to the flat, and makes a catch behind the line of scrimmage. This ends up being one of the more impressive three-yard gains you might see this season:

Likely makes multiple defenders miss in space, turning what could have been a loss on the play into a positive result. These change-of-direction skills in the open field are essential for turning shorter throws into explosive plays.

On Sunday night, one of Likely’s eight receptions was this simple sit route, squatting over the ball between two defenders. But when the linebacker closes to make the tackle, Likely runs through him, generating more yardage after the reception:

Then there was this catch-and-run from late in the second quarter. The Ravens dial up a simple double-stick concept, with Likely running the stick route from the inside trips alignment. The Cardinals are in man coverage on this play, and Likely works himself open against safety James Wiggins. After making the catch, he breaks free from Wiggins’ tackle attempt and darts upfield.

He next encounters safety Deionte Thompson, and makes him miss in the open field, en route to a 31-yard gain, the bulk of which came after the reception:

If he can turn in these kinds of plays on Sundays in the fall, the Ravens will have some options in the passing game.

And, after all, that might be the biggest point.

With the departure of Hollywood Brown to, well, Arizona, one of the biggest questions about the Ravens this season has been how they will generate explosive plays in the passing game. Much of that discussion has focused on Rashod Bateman and the wide receiver room, but as we have seen in the past few years, much of the Baltimore passing game runs through the tight end position.

Using both 12 and 22 personnel, the Ravens have relied on tight ends to manufacture plays in the passing game the past few seasons. With Likely’s skill-set on the field, Baltimore can look to continue that trend. He also has been used out of a few different alignments so far, whether aligned in-line, on a wing, in the slot or even flexed outside. As we get into the regular season, we could see the Ravens move him around even more, forcing defenses to account for him with different personnel packages.

Which could be a very good thing for the Baltimore passing game.

Everything You Need to Know About BTS

Every Anime Genre You Need to Know About

Best Persona Games You Need to Know About