Surrogacy – What Is It And When Is It Recommended? Find Out From The Expert Surrogacy is a type of pregnancy in which a woman carries and delivers a child for another woman who is unable to or don’t want to due to a variety of factors. This procedure has benefited a great number of people in becoming parents in recent years.

It benefits a small group of women who were born without a uterus or who had their uterus surgically removed for various reasons. Surrogacy may be an option for some uterine problems, such as a large fibroid or any other medical condition that precludes a woman from bearing her kid.

The most recent surrogacy regulation bill, which takes effect from January 25, 2022, proposes to prohibit commercial surrogacy and allow only altruistic surrogacy, in which the intending parent pays for the surrogate’s medical bills and insurance coverage.

“Surrogacy is often characterised as “borrowing” or “renting” a womb in layman’s words. It is a procedure in which a surrogate bears a baby in her womb for a couple (intended parents) during the pregnancy and then agrees to deliver the baby to the couple after she gives birth,” explains Dr Kshitiz Murdia, CEO & Co-founder, Indira IVF, Udaipur. He says when the surrogate woman is not genetically related to the baby and carries the baby in her womb is known as gestational surrogacy. “In this process, the intended mother’s egg is combined with the husband’s sperm, and the resultant embryo is implanted in the surrogate mother’s uterus through IVF,” says the doctor.

There are various conditions that need to be fulfilled while selecting a surrogate. “The surrogate must have been married at least once and have her own kid and should be between the ages of 25 and 35. When a couple decides to take up surrogacy, they should ensure that the surrogate is in good health, free of infectious ailments, and medically fit,” adds Dr Murdia who says the surrogate should also give her proper consent to the procedure and not be doing it for monetary benefit.

When Is Surrogacy Advised?

Dr. Murdia describes the medical circumstances under which the option of surrogacy is prescribed. 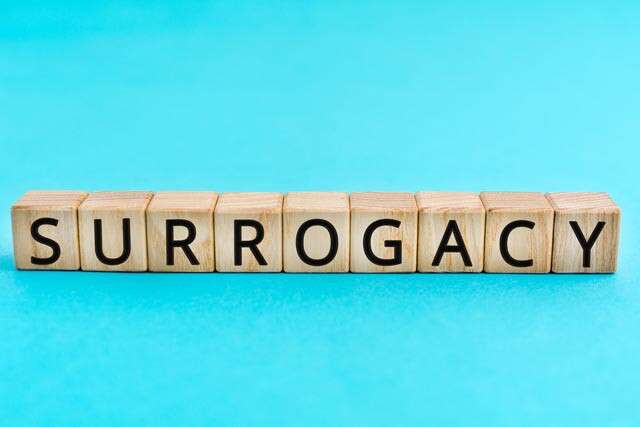 What Does ART Bill Say About Surrogacy?

The recently approved ART bill by the Indian government lays certain criteria for couples who are eligible to undergo surrogacy now. To begin, a “certificate of essentiality” is required, which involves confirmation from the District Medical Board confirming one or both parties’ proven infertility, as well as a Court order establishing parenthood and custody of the child born through the surrogate. It also ensures that the surrogate is covered for postpartum delivery difficulties for a period of 16 months. It also includes conditions such as the intended partners must be Indian citizens, between the ages of 23 and 55 for the wife and 26 to 55 for the husband and have been married for at least five years. Such couples are not allowed to have any surviving children (biological, adopted, or surrogate); however, this does not apply to children who are intellectually or physically challenged or have a life-threatening disease.

Becoming a Surrogate Mother – What Are the Pros & Cons?

The pros of surrogacy

Surrogacy can be a fulfilling experience for everyone involved, both for intended parents (IPs) and gestational carriers (GCs). Particularly in the case of GCs, being pregnant whilst helping another family selflessly is the main pro they report after experiencing going through the surrogacy journey.

Here’s the full list of benefits and positives of gestational surrogacy:

Helping a couple create a family

Those who have struggled with infertility or with medical conditions that make pregnancy unsafe, or same-sex couples have no alternative but to use a surrogate mother to have a baby, hence the deep sense of pride and satisfaction knowing that you are helping a family in such a life-altering way.

This is precisely the reason why the majority of surrogates have a strong sense of compassion, value the power of family, and are noted for their unselfishness.

Going through such a singular experience and sharing your story is often complicated when others cannot relate. For this reason, surrogates have created over the years what is commonly known as surro-sisterhood, that is, a community for mutual support, events, social gatherings, etc.

Moreover, it is common for surrogates to involve their families, friends, and other supportive people throughout the surrogate pregnancy journey. This sets an incredible example of generosity for those around them.

Most women who report having experienced surrogacy as one of the most fulfilling experiences of their lives agree on their main motivation for having helped families this way: they perceive it as an altruistic gesture above all, in spite of getting paid.

Being compensated for carrying a child for 9 months, with the risks and everything involved in a pregnancy, seems quite fair. In countries and states where commercial surrogacy is permitted, GCs are compensated for their effort and commitment. It is a chance for intended parents to say ‘thank you’ to their surrogate.

As explained earlier, surrogates typically have a personal trait in common: they truly enjoy being pregnant. Keeping in mind that they should have carried other pregnancies before and have a proven uterus, carrying a child for another family is indeed an opportunity for them to experience pregnancy again.

Gestational carriers are perfectly aware of the risks that a pregnancy entails, but they accept this risk along with the physical implications that it involves because their sense of generosity outweighs them.

Surrogacy contracts ensure that gestational carriers are fairly compensated for their time and effort. Also, they absolve them of any responsibility following childbirth, and outline each party’s rights, roles and responsibilities.

One of the most important tasks of surrogacy agencies is to do the right intended parent-surrogate match, ensuring that they share the same expectations and ways to look at life in general. Moreover, they encourage post-birth contact between the surrogate, the IPs, and the child.

Thanks to it, surrogates are able to share their pregnancy journey with the IPs and develop a strong bond throughout the 9 months of pregnancy. This, in most cases, allows them to develop a lasting relation with the family they help create, including the child.

The cons of surrogacy

Before becoming a surrogate, it is important that you completely understand the lengthy medical and emotional process that you are going to go through before, during, and even after the pregnancy.

On top of that, many uncomfortable medical tests, risks, and ethical considerations are involved. No matter how much you love being pregnant, you should consider these disadvantages before submitting your application to become a GC:

Potential surrogates are required to go through an extensive pre-screening process before being accepted in order to ensure that they are psychologically and physically prepared for surrogacy.

Most importantly, these procedures help ensure that their bodies are fit to carry a child until birth, and that their reproductive system is in good functioning condition. The particular medical tests used often vary from case to case.

A pregnancy can be a rewarding experience, but it’s no wonder that most women find various aspects of pregnancy challenging, no matter how much they enjoy being pregnant.

And, what’s more, even the most low-risk pregnancies carry some risk of complications. Keeping in mind that you are going to be carrying a child for another family that is not your own, you are expected to have a great deal of compassion.

In addition to the physical changes of pregnancy itself, a gestational surrogate has to undergo endometrial preparation to get ready for IVF embryo transfer. Additionally, GCs are required to undergo additional screenings, medical appointments, etc.

Other risks associated with surrogate pregnancies are multiple pregnancy, especially if multiple embryos are transferred, miscarriage, and ectopic pregnancy. Moreover, you are likely to experience mild cramping when the catheter is inserted through the cervix to place the embryo(s) into your uterus.

If we keep in mind that mood swings are a common side effect of pregnancy, when a woman decides to become a surrogate mother, the number of emotional challenges increases.

While at times you may feel intense joy and excitement, other times you will need strong support from your beloved ones: partner, family, friends… Even your coordinators at your surrogacy agency will be there to support you throughout the surrogacy journey.

It depends on the state or country where you reside, but in general being a surrogate carries some stigma in some social circles, especially in those influenced by religion, political factors, ethical considerations, traditions, historical background, etc.

For this reason, when a woman is considering surrogacy, she should consider how willing she is to face uncomfortable questions and the social impact in general.

Lat but not least, it is well known that surrogacy is a highly controversial issue in today’s society, and that many organizations are against the process for a number of reasons.

Subjects such as the identity of the child once born, the level of involvements with the gestational surrogate, the attachment with her, or the compensation that she should be pain are some of the most controversial issues associated with it.

Can the surrogate mother’s emotional attachment become a psychological trauma?

That’s precisely the reason why traditional surrogacy arrangements are not carried out anymore. If a woman is the biological mother of the child in addition to the birth mother, the emotional attachment will be stronger.

In gestational surrogacy, inversely, even though it’s only logical that you build a tie with the child anyway, it also develops with the intended parents: surrogates feel happiness for the intended parents, hence that they build a lifelong relationship throughout the 9 months of pregnancy. This translates into love not just for the child, for for the new family as well.

Does surrogacy equal exploitation of women?

Any surrogacy agreement has to be properly reviewed by attorneys, supported by a well-defined law, and done respecting the rights of the surrogate and all the parties involved.

What are the benefits of commercial surrogacy?

Surrogacy advocates argue that it is very unfair to have a woman carry a child for someone else and get nothing in return. In fact, they believe that it allows for a better regulation of this practice, thereby protecting everyone’s rights and improving the legislation. Critics, on the other hand, feel that paid surrogacy is a way of taking advantage of vulnerable women.