Rings, Gestures, and Phallus Talismans: The Evil Eye and Ancient Ways to Ward Off Its Power 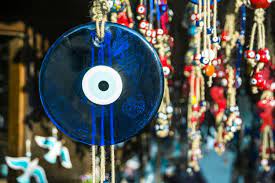 For over 5000 years people have worried that a look of envy or dislike would inflict injury, bad luck, or even death on the recipient. People would wear specific items of jewelry or other talismans to protect themselves from these events. One example of this was found in Croatia in the form of an eye-catching ring.

That ring dates to the 3rd century. It depicts either a rabbit or a mouse nibbling a flower (believed to be a sign of happiness) and an eye above the scene – a symbol meant to protect the wearer from misfortune. It was one of about 200 artifacts found in Vinkovci, a town in Croatia that predates Roman occupation. The accompanying ceramic items were dated from the 1st-6th century.

The ring meant to protect against the evil eye which was found in Vinkovci. ( pneymatiko)

One of the oldest known texts mentioning the evil eye is a clay tablet inscribed with prayer to ward off its effects. It was created by the Sumerians around 3000 BC. A similar prayer is still in use amongst many cultures around the world.

However, the concept of an ‘evil eye’ may predate the written word. Many researchers suggest that 10,000-year-old drawings found on cave walls in Spain also depict symbols that were meant to defend individuals from the evil eye.

Belief in the evil eye is a worldwide phenomenon, however it’s particularly strong in the Middle East, Central America, East and West Africa, South Asia, Central Asia, and Europe – especially in the Mediterranean region. It also spread to Celtic regions of northern Europe and to the Americas (via European colonists and Middle Eastern immigrants). The tradition and concept of the evil eye can present itself somewhat differently in each culture.

Amulets against the evil eye from de Basque Museum of History of Science and Medicine. (Museomed/ CC BY SA 3.0 )

The ‘evil eye’ is found in the Old Testament and Islamic doctrine. For example, Sahih Muslim, Book 26, Number 5427 presents a statement by Muhammad “The influence of an evil eye is a fact…”

‘El mal de ojo’ (The Evil Eye) (1859) by John Phillip. ( Public Domain ) Note the hand gesture of the Spanish gypsy who thinks she is being given the evil eye.

Numerous talismans have been created to ward off the curse of the evil eye. In many cultures, they are disks or balls with concentric blue and white circles, a blue or green eye on a hand, or other items which represent an eye.

Other protective measures have also been taken against the evil eye across cultures and time: blackening the face, especially near the eyes (for some Asian children) and eating alone or only with immediate family members (some Asian and African people believe their souls are especially defenseless while their mouths are open). Some cultures believe it is important to consume certain foods, use specific hand gestures, wear sacred texts, or display particular ritual drawings or objects for protection against the evil eye as well. In Roman times, the bearing of a large phallus image around one’s neck was also thought to protect from this type of curse –believing it would draw ‘the eye’s’ attention to the object rather than the wearer!

Attacking the evil eye: The eye is pierced by a trident and sword, pecked by a raven, barked at by a dog and attacked by a centipede, scorpion, cat and a snake. A horned dwarf with a gigantic phallus crosses two sticks. Greek annotation “KAI SU” meaning “and you (too)”. Roman mosaic from Antiochia, House of the Evil Eye. ( Public Domain )

Even though medical science shows the evil eye could not kill, centuries of deaths have been blamed on its curse. So-called witches in medieval Europe were often ‘identified’ and killed because they cast an angry glare at someone who later died. The British court was even so scared of the power of the evil eye that it forced accused witches to walk backwards into the courtroom.

Voices of the Dead: The Strange Origins of Eye Idols

Urfa man, known formally as the Balikligöl statue, is the oldest human-size statue of a man discovered in the world to date. He is currently housed in Şanliurfa’s Archeology Museum, Southeast Turkey. Urfa man was discovered in the Old Town section of Şanliurfa, but in antiquity belongs to the same thought world of Göbekli Tepe, a site half an hour away from the museum by car.

The late Professor Klaus Schmidt, former head of excavations at Göbekli Tepe, an unexpected archaeological precursor between Neolithic mindsets and the birth of Sumerian and Egyptian civilizations, discerned Urfa man as inferior to Göbekli Tepe’s humanoid T-shapes, but minister to them. That Urfa man and the T-shapes might relate can be seen in the double V-shape neck design. Pillar 31, one of the dominant twin-pillars of Enclosure D bears a similar double V-shape at the neck. Significantly perhaps, this pillar’s companion (pillar 18) bears only a single V-shape marking. Urfa man is embracing his genitals, and the twin-pillars of Enclosure D are both depicted embracing the navel.

An imposing figure standing over 6ft tall, it seems clear Urfa man was a cult statue even though only one of his kind has been found to date. That he may have had connection with fertility is persuasive, but ‘fertility’ can be applied as an answer to everything from the ancient world. Turning our attention to the strange, vaguely unsettling appearance of the face, Urfa man’s voiceless image cast by a conspicuously absent mouth and gazing obsidian-filled eyes is hauntingly enigmatic, but offers a link with another class of ancient statuary known as the eye idol. Shown below is a selection of eye idols currently at the Şanliurfa Museum. Though Urfa man is much larger than an eye idol, both may have imbued a related ‘voice technology’ in their manufacture.

If the controversial psychologist Julian Jaynes had been exposed to Göbekli Tepe and its monuments, he would likely have found a compelling candidate of his bicameral hypothesis in Urfa man. While we should remain skeptical of Jaynes’ thesis as a whole, he produced some perceptive, freestanding observations of ancient artifacts. Jaynes, who wrote on eye idols, suggests their mouthless design was to enhance more hypnotically the hallucination of the dead (kings, priests, ancestors, etc.) continuing to speak to the living. Jaynes traces the psychological folklore of vision:

Eye-to-eye contact in primates is extremely important. Below humans, it is indicative of the hierarchical position of the animal, the submissive animal turning away grinning in many primate species. But in humans, perhaps because of the much longer juvenile period, eye-to-eye contact has evolved into a social interaction of great importance. An infant child, when its mother speaks to it, looks at the mother’s eyes, not her lips. This response is automatic and universal. The development of such eye-to-eye contact into authority relationships and love relationships is an exceedingly important trajectory that has yet to be traced. It is sufficient here merely to suggest that you are more likely to feel a superior’s authority when you and he are staring straight into each other’s eyes. There is a kind of stress, an unresolvedness about the experience, and withal something of a diminution of consciousness, so that, were such a relationship mimicked in a statue, it would enhance the hallucination of divine speech.

Jaynes perceived eye idols not as ornamental, but as speaking statues containing voices of the dead – as figurines assisting as aids in the production of hallucinated voices. Some types of eye idol were placed near elements such as running water to increase their speaking power, while others were located in temple areas and feature markings that symbolize gods. Their physiognomy is featureless apart from the eyes.

More comparable in age to Urfa man than the smaller, more portable idols of Tell Brak, are the eye statues of Ain Ghazal, which are similarly minimalistic in their portrayal of other facial features. Lewis-Williams suggests this was to enhance their supernatural sight or, a type of seeing beyond human experience, but little ventures what reciprocity these artifacts may have had.

In archaeological schemes, human sculpture can be conceived as the artistic attempt to portray the body in realistic terms – the reason why Greco-Roman example is seen as the climax of this process – and though the genital embrace of Urfa man is ill-margined compared to that of his navel bracing T-shape overlords, they appear to coincide in intended design. Interestingly, some eye idols may have conveyed an unspecified sense of fertility too. At the so-called ‘Eye Temple’ of Tell Brak, Northeast Syria, not far from present-day Şanliurfa but distanced by millennia, thousands of eye idols were discovered. Some of these appear to be depicted ‘embracing’ a minor.

Eye idol ‘embracing’ a minor. Photo courtesy of the author.

If Urfa man embraced a notion of fertility, and if he depicts a deceased person, it might not directly relate to the human, but symbolize the annual reappearance of the seasons, comparable to the Egyptian god Osiris who mysteriously germinated the world from his invisible realm of the dead. In relation to this, we recall the theme of a headless, ithyphallic man on pillar 43 (the ‘vulture-stone’) at Göbekli Tepe.

This image merges a figure of death with a continuity of fecundity. However, we should avoid linking Urfa man with that figure too closely, since the man could be in a  shamanic-type of ecstasy with the head (as organ of supernatural sight, of seeing beyond) temporarily detached. Jaynes, however, groups the symbolism, and use, of severed heads with the eye idol, in that both were devised to evoke aural hallucinations. The necromantic use of severed heads was also present in Neolithic Europe and, interestingly, closer to home in  Harran. A magical grimoire known as the Ghayat al-Hakim (later translated into Latin as  Picatrix) relates how the demon worshipers of old Harran kept a severed head which gave out prophesies.

Conversely, so to speak, there have been detached stone phalluses discovered at the site.

It is likely that Urfa man, fervent in deceptive silence and stood at the boundary of the living and the dead, was consulted at night. His pale limestone material gleaming with a spectral appearance, with a possible influence of psychedelics, augmenting the experience of him ‘speaking’.

Furthermore, there may have been wider interest in subliminal sounds and voices produced to even more tangible effect at Göbekli Tepe fulfilling an archaeoacoustic design. Some of the pillars were interred in weak foundations as if to drone musically in the wind. An attempt to auditorily mimic the faceless, cosmos-defining beings central at this site?