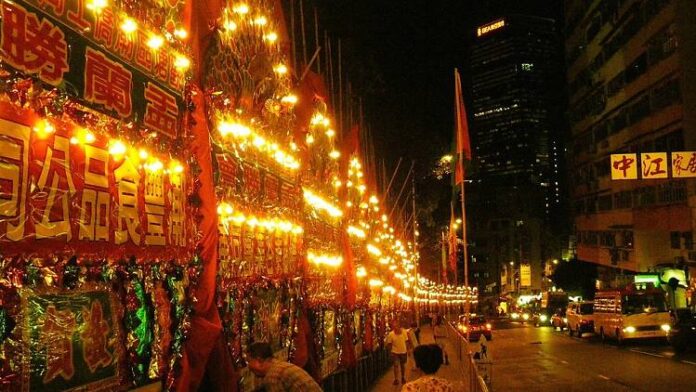 The Hungry Ghost Festival, also called Zhong Yuan Jie, is a celebrated event in the seventh month of the year. It’s an event practiced by Taoists and Chinese Buddhists where they believe the gates of hell or the ghost gate open, letting hungry ghosts roam around freely. If you live in Asia, you probably know about this festival even if you aren’t a Taoist or Buddhist. You could call it the Halloween of China if you lack a better description of it.

It’s not the same, though. The Hungry Ghost Festival isn’t a time where you can wear Ghost Adventure shirts and ask around for candy. It’s a sort of reunion between the living and dead where the living feeds the dead to appease them.

For the Chinese people, the ghost month is a sacred celebration. It’s a way to reconnect to those we lost. It’s also an activity the monks do to protect those who are living. Either way, it’s a serious tradition that natives and tourists shall observe.

They call it the Hungry Ghost Festival because the ghosts that appear this month are all hungry and need to be appeased. The etymology of ghost stems from the Old English word, gast, meaning spirit or soul. While the etymology of hunger comes from the proto-Germanic word, hungraz, meaning a scarcity of food. Combining the two makes it the correct English translation for the festival.

The Hungry Ghost Festival, or the Chinese Ghost Festival, is celebrated as both a Taoist holiday and a Buddhist Chinese festival. Its Taoist origin focuses on placating the spirits that escape from the ghost gate. As a Taoism holiday, its objective is to restore peace and balance. As for Chinese Buddhists, it’s mainly regarding filial piety.

Hungry Ghost Month for Taoists falls on the birthday of Di Guan Da Di, a religious figure that is said to forgive sins. On the 15th of the 7th month, Di Guan Da Di descends to Earth to make a checklist of all the bad and good the humans have done. It’s a ghostly info sheet regarding our life choices.

Taoist Priests aid the souls that enter the earth during this month. Most of the spirits are looking for people and food. They would perform rites to calm the ghosts down and offer food. Temple devotees would come to profess their sins and ask for forgiveness.

For Buddhists, the Hungry Ghost Festival also comes with another name: Yu Lan Pen or Buddhist Ullambana Festival. Unlike the Taoist way of celebrating ghost month, Buddhism focuses on serving offerings for their ancestors and dearly departed. This is to provide support for those in purgatory.

The practice is said to come from the story of Mu Lian and his mother. According to the legend, Mu Lian’s mother was turned into a hungry ghost for eating meat soup. Mu Lian’s mother was unaware that she had insisted for her to remain vegetarian. Unfortunately, this caused her to descend into the depths of hell. Mu Lian’s efforts to feed his starving mother included venturing into hell to find her. It was only when Buddha taught Mu Lian the rites that Mu Lian’s mother was released from her sentencing.

What is the 7th month of the Hungry Ghost Festival? August usually falls on the 7th month of the year in the Lunar Calendar. It’s the day that Di Guan Da Di, ruler of Earth, descends from above to judge all the living and departed. It’s also the most auspicious month for many Asian countries.

Since Taoism and Buddhism are prevalent in Asia, it’s no surprise that a lot of places practice the ghost month. Countries like Singapore, China, Hong Kong, Malaysia, Korea, Japan, Thailand, Cambodia, Indonesia, and Sri Lanka practice it despite modern advancement. It’s actually now a tourist attraction. Some countries burn fake designer bags, cellphones, and food to appease the spirits during this time. The smell of incense or smoke becomes normal as well.

If you’re looking to visit Asia and wish to see one of the most culturally spread traditions across nations, the seventh month is the best time to go.

For the Hungry Ghost Festival preparations, the seventh month of the year’s 15th day is the showdown. Aside from being careful throughout the whole month, there is also a particular habit of preparing three meals and burning incense to invite the departed hungry ghosts to a meal. The people may eat together with the spirits and discuss their current lives or seek advice. This is the Chinese Buddhist practice of the Hungry Ghost Festival. Other folks also add the practice of burning joss paper.

Joss paper is what they call “ghost money” and allows the dead to receive financial support from the living. Others make luxury items out of paper mache and burn them as well as an offering to the hungry ghosts.

Aside from Taoist priests also preparing offerings, they also go around in their location just like the Buddhist priests and perform rites to the wandering souls that could become violent due to jealousy or hunger.

There’s a lot of hungry ghost press with people taking snapshots and celebrating this important month for the Chinese ghosts’ culture. This is why there are many rules regarding the safety of the people to not incur the wrath of a hungry ghost. Buddhism and Taoism have very similar rules and if you do not practice their religion, it is still important to be aware of what you can or can’t do during this ritual.

Be extra nice to insects.

They say that during this month people should be especially nice to small animals. This is because some of them could be your ancestors coming to visit you.

Do not purchase a car or home.

Some believe that hungry ghosts could get jealous of material possessions. If they see you buying a car or a house, they might attack you out of pure jealousy.

Do not touch or step over roadside offerings.

This is one of the most important rules during the hungry ghost month. If you happen to make a wrong step and tumble over an offering, you must immediately apologize. The hungry ghost feeding on the offering will most likely forgive you.

Do not look under the prayer altar.

Aside from it just being rude, there could be spirits feasting underneath the altar as devotees and priests send prayers. It would definitely annoy you if someone disturbed you while eating. It’s the same for the hungry ghosts.

Do not sit in the front row during performances.

There are getai performances throughout the month. Getai is a Chinese opera performance where they entertain the spirits visiting for the month. It is a common practice to leave front seats empty so the ghosts could sit on them. This is also observed even if all the seats are taken. If you sit in any of the front seats, it’s not only the hungry ghosts that’ll be angry at you, expect the living to feel the same way.

According to the legend, the colors red and black are the colors that attract the dead. They also say that if you leave your clothes out in the laundry at night, a hungry ghost may try them on so they can get inside your house.

This is a life-saving one. It is believed that some hungry ghosts that died due to drowning may want a living being to take their place. If you cross paths with a hungry pool while swimming in a pool, river, lake, or even the ocean, it might be too late to save you.

Do not touch anyone by the shoulder.

Some believe that touching one’s head or shoulders, even just by tapping, causes the torches of fire surrounding the person to die out. This makes them vulnerable to ghosts thanks to the imbalance of yin and yang.

Avoid staying out in the evening.

The yin energy from the moon makes ghosts more powerful at night. This makes them easier to attack humans. Pregnant women and children must stay indoors as the ghosts are incredibly fond of them the most. Nonetheless, anyone staying outside is still at risk.

Do not pick up or take notice of any stranger occurrences.

If you find an item oddly misplaced in the street, hear a faint sound of someone calling your name, or even smell a strangely pleasant smell out of nowhere, you must ignore it. During the ghost month, hungry ghosts lay out traps for humans to gain possession of their bodies. You must always avoid interacting with anything suspicious. If someone calls your name, immediately walk away or run, even.

The Hungry Ghost Festival is an exciting cultural tradition that has stood the test of time. Mu Lian’s love for his mother earned him the ritual directly from Buddha to help the lost souls plunged into hell or purgatory. Despite them being hungry ghosts, some of them can also be your dearly-departed relatives, and family is what this tradition is all about. Of course, violent entities still appear from time to time, so it pays to be vigilant. It’s important to know what to do, what you shouldn’t, and why they’re important. Have a Hungry Ghost Festival that is safe, enjoyable, and educational!

Things You Need to Know About Charles Manson & His Cult