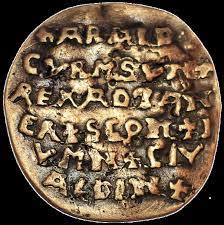 In 2014, a young girl living in Malmö, presented her teacher with a small golden disc brought to Sweden by her Polish grandmother. Little did she know that this small golden artifact, now dubbed the Curmsun Disc, was hiding a complex and fascinating story which could hold clues to understanding the reign of the Viking king Harald Bluetooth.

The new church in Wiejkowo, Poland. The Curmsun Disc hoard was discovered while foundations were being laid for the new crypt back in 1841. (Radosław Drożdżewski /  CC BY 3.0 )

The Fascinating Tale of the Curmsun Disc Discovery

Before delving into describing  what the disc is, and the meaning of its words and symbols, we need to tell the story of its discovery and rediscovery. It is a tale uniting a series of the most unexpected characters, twists and turns. According to  The Curmsun Disc Research Project , when the girl presented the golden artifact, luckily her history teacher knew precisely what to do and contacted an archaeologist to find out more.

Research has since determined that in 1841 a medieval  Viking chapel in Wiejkowo,  Poland, about 3 kilometers (1.86 mi) away from the modern island town of Wolin on the east bank of the river Dziwna was demolished to make way for a new church. While the foundations were being laid for the new  crypt, a 12-year-old boy named Heinrich (Henry) Boldt found a  Viking hoard  at the entrance to an older, medieval cellar crypt.

The haul comprised “ medieval coins , some gold objects, at least two swords and other items characterized as silver and gold scrap.” The young discoverer handed over the  Viking hoard  to the local pastor and it was split equally between the boy, the holy man and all of the workmen who were present during the discovery. However, the pastor’s share and half of Henry’s portion of the treasure was returned to the crypt for safe keeping.

How the Curmsun Disco Reached Sweden

History would have known nothing of this Viking stash if Boldt hadn’t emigrated to America and written to the pastor in 1869 saying he needed him “to dig up what they once had hidden on the island.” As fate would have it, the Pastor had passed away before the letter arrived, but fortunately for researchers, it was added to the pasto’s five journals.

The treasure lay hidden beneath the church foundations until May 1945 when allied forces were establishing a new border between Poland and Germany, across territory to the west of Wolin Island. Polish soldier, Major Stefan Sielski, was escorting authorities from Köslin to Swinemunde on the island, where he was introduced to a craftsman named Otto who claimed he had recently helped two noble German families to hide coffins when Russian forces took over the region.

Stefan and his brother Michal were shown where the coffins were hidden and subsequently rediscovered the Viking treasure haul comprising “a silver coin from the reign of Otto I, a dash decorated bronze  bracelet and part of a second similar bracelet, a tiny piece of stamped gold and the golden Curmsun disc.” At the time it was not identified as gold, so the disc was kept in a button box.

That is until 2014 when Sielski’s 11-year-old great-granddaughter, Maja Sielski, discovered the box brought to Sweden by her Polish grandmother after World War II and showed it to her teacher who identified it as a  Viking treasure .

The Artifact Itself: The Golden Curmsun Disc

It’s important to understand the artifact at hand. Classified as a “casual” discovery,  Medieval Histories  explains that there is some debate as to the authenticity of the Curmsun Disc artifact. Archaeologist Sven Rosborn has however studied the artifact and determined its authenticity.

The understanding is that the Curmsun Disc was crafted between 960 and 1125 AD. It is engraved with Latin words referring to the Viking king  Harald Bluetooth , ruler of Danes, Scania, and the Viking stronghold Jomsborg. The disc also mentions the king’s father, Gorm the Old, and the Bishopric of Oldenburg in Holstein.

More recent research by Marek Kryda, using remote sensing tools, concluded that the original crypt under the current Wiejkowo church could have been the burial tomb of Harald Bluetooth. The location was once home to a major Viking stronghold. If this is true, the Curmsun Disc  hoard may have held vital secrets for understanding the life and era of Harald Bluetooth.

The Curmsun Disk has also been analyzed by Professor Jonny Westling at Lund University in Sweden, who determined it has a diameter of 4.5 centimeters (1.8 in) and weighs 25.23 grams (0.890 oz). Furthermore, Westling discovered that it was a “non-homogeneous alloy with a gold content ranging between 83.3-92.8%.”

The obverse side of the disc reads  +ARALD CVRMSVN+ REX AD TANER+SCON+JVMN+CIV ALDIN+ . Researchers have translated this to mean “Harald Gormsøn king of Danes, Scania and Jomsborg in the bishopric of Oldenburg.” The reverse side features a cross with four dots encircled in an octagon. According to historian Sven Rosborn, the dots represent the four evangelists who guard the four corners of the cross: Mathew, Mark, Luke and John. Therefore, while one side is loaded with historical content the other makes no sense without knowing a thing or two about the world of medieval Norse magic.

Interpretation of the Golden Curmsun Disc

Karen Schousboe, Danish anthropologist and Editor-in-Chief at  Medieval Histories , wrote that the Curmsun Disc was possibly “a wedding gift during Harald Bluetooth’s second marriage.” If this accurate, it would mean that the disc was created in the 960s AD. Furthermore, Schousboe identified design similarities between the Curmson Disc and 10th to 12th century Byzantine talismans.

This means that in order to accurately interpret what the Curmsun Disc, we need to dive into the non-material world of Norse Christian magic. Essentially, on the simplest level of interpretation, a  talisman or amulet was a tool imbued with supernatural properties, and as such, wearers believed it guarded them and their families from  bad luck  and ill-fortune.

In 1993, scholar Jeffrey Spier published an article entitled “Medieval Byzantine Magical Amulets and Their Tradition” in which he explained that “the talisman takes many forms, including engraved gems and cameos, enamel pendants, die-struck bronze tokens, cast or engraved pendants of gold, silver, bronze, and lead, and rings of silver and bronze.” Talisman were used much earlier in Hellenistic Egypt and Greco-Roman magical traditions and their spiritual applications found their way to Sweden with the spread of  Christianity in the 11th century.

Returning to the golden  Curmsun Disc  which is imbued with Christian symbols, it is perhaps no surprise to learn that it was King Harald “Bluetooth” Gormsson (c. 958 – c. 986), son of King Gorm the Old and of Thyra Dannebod, who introduced  Christianity to Denmark. However, something really surprising occurs when you look at name given to the modern bluetooth wireless connection logo.

In 1997,  King Harald Bluetooth , whose  name came from his bluish-grey dead tooth, lent his name to our modern wireless connection when its creators claimed the  new technology  would “unite devices the way Harald Bluetooth united the tribes of Denmark into a single kingdom.”

Everything About the Stonehenge

Famous Landmarks That You Must Know About

Warlock vs Wizard – Things You Need to Know

The Gods and an Ancient Andean Calendar at the Salar de...

When The Dead Come Calling – Signs That A Deceased Loved...