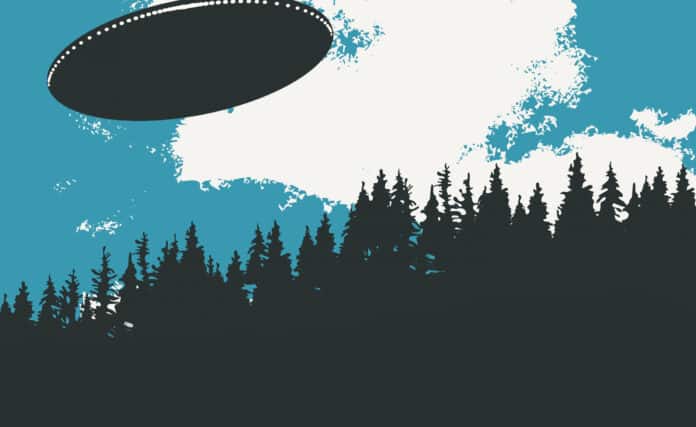 The tropes of an alien abduction — the UFO chasing the car, missing time, strange experiments, grey-skinned beings with large eyes — emerged primarily from two alleged experiences, the Betty and Barney Hill case in 1961, and Travis Walton’s in 1975. Beyond having an enormous influence on pop culture, these are the most famous so-called close encounters of the fourth kind.

They are also the most well-documented cases, according to UFO expert and former FBI special agent, Ben Hansen. And in two new discovery+ “Shock Docs,” Alien Abduction: Betty and Barney Hill and Alien Abduction: Travis Walton — debuting Feb. 18 on the streaming platform — Hansen walks audiences through the stories, and offers up new evidence that he believes corroborates the abductees’ claims. Likewise serving as consulting producer on the Shock Docs, Hansen, who is also currently filming the second season of UFO Witness for discovery+, joined Den of Geek’s paranormal pop culture show Talking Strange to discuss the connections between both specials.

“These set the stage for a lot of movies and TV shows that came afterwards,” says Hansen. “It put [alien abductions] in the public consciousness, along with, ‘What does a Grey look like?’ … none of that really existed before.”

According to the Hills, they were driving late at night in 1961 along a deserted New Hampshire highway when their vehicle was chased by a UFO. They reported missing two hours of time, and later underwent hypnosis and each relayed repressed memories of medical experiments aboard an alien craft conducted by what came to be known as Grey extraterrestrials. Although they spoke of the experience to some small groups, the story became national news without their consent when a reporter wrote about it. Suddenly the couple were thrust into a spotlight.

“It was the first widely shared story of an abduction,” says Hansen. “Up until that point, there were a lot of sightings and fringe topics of people saying they went to Venus, but not abductions.

The Hills were an interracial couple, and involved in the civil rights movement, and Hansen notes that Barney didn’t want to be stigmatized because of the encounter.

“It was a distraction for what they were trying to accomplish,” he says. “He was already in the press for participation in civil rights … adding ‘alleged alien abductee’ didn’t help.”

The case was investigated by both the U.S. Air Force’s Project Blue Book, and the civilian research group National Investigations Committee On Aerial Phenomena (NICAP). And eventually, eyewitnesses were interviewed that claimed they had seen something strange in the sky around the same time as the Hill experience. But it is the at-times disturbing recordings of the Hill’s hypnosis session — portions of which are played in the Shock Docs — that are the most powerful.

In the United States the first story of abduction by extraterrestrials that received national attention was that of Betty and Barney Hill, a couple from New Hampshire who claimed to have been kidnapped in a UFO in 1961. There is, however, another, earlier, story of abduction. This one dates from 1957 and centers around Antônio Villas Boas, a farmer from rural Brazil.

According to Villas Boas, he was plowing fields with his tractor when he was taken against his will by a group of ETs measuring about 5 feet tall. On their spaceship he was put in a room where he saw some kind of gas come out of the walls, making him sick. Then a very attractive female, naked, with long platinum-blonde hair, fire-red pubic hair and deep-blue cat eyes, came to him and forced him to have intercourse. (I imagine he didn’t resist much.)

According to Villas Boas, her intentions were quite clear: to produce a human-alien hybrid that she would raise on her planet. After he got back, Villas Boas noted he had burns on his body. A doctor from a reputable medical center diagnosed them as radiation burns. This doctor, Olavo Fontes, had contacts with the American UFO research group APRO. Villas Boas had no recollection as to how he got the burns.

The story gained worldwide popularity in the late 1950s. Many were led to believe its veracity for politically incorrect reasons, claiming that a “humble” farmer from rural Brazil was not be able to concoct such a tale. In reality, Villas Boas was not really humble or uneducated. His family owned large tracts of land and at least one tractor. He later became a lawyer and practiced until his death in 1992.

A sensationalist video about the case by Paranormal TV tells its own version of the story.

The overwhelming majority of scientists categorically deny that narratives of abductions are real in any way. Most cases are, if not plain hoaxes, the product of various kinds of abnormal psychological states.

American researcher and skeptic Peter Rogerson questioned the veracity of Villas Boas’ narrative, arguing that an article about alien abduction had appeared in the widely popular magazine O Cruzeiro in November 1957. He noted that Villas Boas’ story only started to gain popularity in 1958 and that Villas Boas could have predated his “encounter” to give it more credibility. Also, Rogerson argued that Villas Boas was influenced (as were many other abductees) by the popular, sensationalist narratives of ufologist Georges Adamski.

Most abduction stories have elements in common with that of Villas Boas: kidnapping in an alien spaceship, medical exams that center around the human reproductive system — or explicit sexual contact with extraterrestrials — and mysterious marks left on the body.

Carl Sagan, in his wonderful book Demon Haunted World, brings these elements together, arguing for a connection between what abductees say now and what narratives of mysterious sexual night encounters have been saying for ages.

Denise Stone was 2½ years old the first time she remembers the alien taking her. She was at home in Hartford with her grandfather. Her mother was at the hospital giving birth to her younger sister. She remembers staring out a large picture window and seeing an egg-shaped object in the sky, hovering over some power lines. “What’s Humpty Dumpty doing up in the sky?” she asked. She remembers the fear in her grandfather’s face when he suggested it was time for bed.

Later that night, as she lay staring at her nursery rhyme-themed wallpaper, an entity walked through her wall. “He looked like a monk, he had a robe, and he was carrying a light. I wasn’t afraid of him,” she said. “He put out his other hand for me to take it, and I did. We walked out into the hallway.” The alien pointed his light at the wall, and they disappeared through it; she remembers being in a large, dome-shaped room with a lot of other children, and they seemed to be learning something. In the morning, she was back in her bed.

Since then, she says, she has been taken more than 50 times, from her home, from the street, from her car, the last time only three years ago, driving through the mountains in Colorado. Each time, it’s the same being responsible. “He looks like your typical gray [alien], but he’s one of the tall ones. It’s just the very subtle shape of his face, his chin is a little wider,” she explained. She calls him her escort. “There’s no friendship. . . . He comes to get me, and I know I’m going to be safe,” she said. “He’s also going to oversee whatever is done.”

Stoner, 68, lives in Florida with her husband. Now retired, she works with fellow “experiencers,” people who feel they have had contact with intelligent nonhuman entities. She also conducts investigations on behalf of the Mutual UFO Network, or MUFON. Being an experiencer is very much part of her identity. Her story is coherent, she doesn’t ramble or get lost in the telling.

There are mythologies dating back thousands of years, for example from Sumerian folklore of 2400 BCE, where a demon in either male or female form seduces people in their sleep. Saints Augustine and Thomas Aquinas wrote of the incubus and succubus demons that come during sleep to have sexual relations with unwilling humans. Similar stories appear in cultures across the world.

Meanwhile, the nearest star to Earth is about 4-light-years away. Our fastest spaceship would take some 100,000 years to get there. If intelligent aliens exist and came here, they would have technologies beyond anything we can dream of: capable of fast interstellar travel, able to come and go without a trace.

One also has to wonder about the alleged repetition of exams focusing on our sexual organs. Given their alleged technological prowess, you’d have to also believe that alien medical tech would be a bit more capable than it has been portrayed in abduction lore.

This is not to say that scientists wouldn’t love to have evidence of extraterrestrial life, especially intelligent life! But the fundamental precept of science is to base claims on evidence backed by verifiable data. Otherwise, why give scientific claims any credibility?

Do You Believe in Alien Abductions?

If you said yes, then you might be among the 77 percent of Americans, according to a 2012 National Geographic poll, who believe that aliens have visited Earth, or the 30 percent of Americans who believe that the government has covered up evidence of alien visitation, according to a 2015 YouGov poll. Or maybe it’s happened to you: There are few hard numbers, however, a 2014 survey for a British talk show found that one in 25 respondents believed they’d been abducted by aliens.

Belief that alien life exists on other planets is persuasive, sensible; nearly 80 percent of Americans do believe it, according to a 2015 poll. But belief that the aliens are already here feels like something else, largely because it requires a leap of faith longer than agreeing that the universe is a vast, unknowable place.

Abduction and contact stories aren’t quite the fodder for daytime talk show and New York Times bestsellers they were a few decades ago. The Weekly World News is no longer peddling stories about Hillary Clinton’s alien baby at the supermarket checkout line. Today, credulous stories of alien visitation rarely crack the mainstream media, however much they thrive on niche TV channels and Internet forums. But we also still want to believe in accounts that scientists, skeptics, and psychologists say there is no credible evidence to support.

The Miracle of the Sun, 1917: Ancient Angels at Fatima? The Possible Common Origins of Star Gods