From the lush oases of Africa’s Ethiopia, across the planet to the sweltering jungles of Mexico, beyond the horizon to the primordial coasts of Hawaii, and back again to the gardens, olive groves, and marble columns of ancient Greece, an obscure common thread of small human subspecies endures. Detailed accounts persist about human subspecies that were small in stature, nocturnal, seemingly gifted with advanced knowledge, who primarily dwelt underground, and emerged to the surface only at night. Is it possible that such specific parallels may be something more than just common mythological archetypes?

Is there really some collective subconscious dynamic that somehow triggers practically every indigenous ethnic group from around the globe to harbor the belief that in prehistoric times there existed two to three foot (0.6 – 0.9 meter) tall people who were skilled masons, astronomers, magicians/sorcerers, and who hoarded treasure? Or is there more than mere ‘belief’ to this story?

As interesting as the mythological parallels are, the beliefs and stories are tempting to dismiss as a widespread element of folklore. However, archaeological evidence in the form of megalithic ruins, stone spheres, platform temples, pyramids, and even remains do indeed exist and seem to have cultural connections with these human subspecies of ancient lore.

Several different Greek scholars, historians, and philosophers wrote about these legendary little human subspecies. In Aristotle’s  History of Animals  (300 BC), he writes:

“these birds [the cranes] migrate from the steppes of  Scythia [modern Eurasia] to the marshlands south of Egypt where the Nile has its source [Ethiopia]. And it is here, by the way, that they are said to fight with the pygmies; and the story is not fabulous, but there is in reality a race of dwarfish men, and the horses are little in proportion, and the men live in caves underground.”

Philostratus also recorded an account of a myth about  Hercules in which the demigod hero slayed a different demigod/giant warrior, and then fell asleep. But Hercules did not know that the  pygmies were related to the giant he had defeated. And he didn’t know they were watching and grieving from their underground realm. He goes on to detail how the pygmies lived underground in tunnels where they stored provisions, had little horses, and when Hercules fell asleep, they billowed forth from under the ground in waves and attempted to bind and capture him.

In 2019, Jason Daley of the Smithsonian Magazine wrote an article about what is believed to be the extremely ancient remains of a  Neanderthal child which was “eaten by a giant bird.” The remains are approximately 115,000 years old and were discovered in  Ciemna Cave , in what is modern day Poland. They were found along with animal bones in a cache which indicated that all the bones, hominin and animal, were preyed upon by and had traveled through the digestive tract of a giant, prehistoric bird. It’s important to note that the Neanderthal remains are few and very tiny, and it is this fact that leads scientists to believe that this was a small child.

Regardless, if these bones belonged to some very small human subspecies or an infant child hominin, either way it is a fact that in the very distant past of prehistory, little humans who were not Homo sapiens were attacked and eaten by giant birds. Modern day biologists have thoroughly studied the migratory patterns of a variety of crane species, and some species of crane do in fact migrate from marshes in Eurasia all the way down to Ethiopia.

The ancient Egyptian polytheistic belief system comes complete with all manner of deities, monsters, and so on, but the cult of the deity,  Bes, is unique.

Unlike most Egyptian deities, Bes was never portrayed from the profile position but always portrayed either in full-frontal two-dimensional form or full three-dimensional sculpture form. Bes was depicted as a diminutive or dwarf human with some subtle anthropomorphic features.

Bes was not a deity to be sought out at some luxurious temple, but his idol was kept at home and it was the dwelling which he guarded wearing his warrior’s tunic. He was a deity of music, protection, fertility, and domestic pleasures. But perhaps the most interesting aspect of Bes is that his cult was relatively new in that it only became widespread during the New Kingdom, and this is the result of its importation from the south ( Nubia, Somalia, or Ethiopia).

In other words, what is interesting about this is that the  ancient Greeks  relay to us that these pygmy human subspecies lived south of Egypt and it is from this same region that the cult of this dwarf god Bes originates.

Nubia brings to mind the many small pyramids that are a mystery unto themselves. While it is generally regarded as no great mystery, exactly who were entombed within these Nubian pyramids is not entirely clear as many of these tombs were allegedly looted in antiquity and today many have been flooded by a rising water table.

In what is now modern-day Mexico, on the eastern side of the Yucatan Peninsula, rests the ruins of the ancient Maya site,  Uxmal. This ancient Maya complex is held as one of the most important and is noted for its large and imposing structures. Among the most impressive and ancient of all these structures is the  El Adivino,  The Pyramid of the Magician, which is also known as The Pyramid of the Dwarf . This name comes from the Maya people themselves who have several versions of how this pyramid was constructed, but in each case, it was constructed by the incredible feats of a mysterious and powerful little human subspecies.

This pyramid has been called the most distinct Maya structure on the entire peninsula (which is saying a great deal). It has very steep/rounded sides, is very tall and has an elliptical base. The simplest account the Maya kept about the pyramid was that a dwarfish sorcerer deity named Itzamna built the pyramid in a single night using only his strength and magic. In another version of the myth, a witch gives birth to a dwarf via an egg and the miraculous birth draws the attention of the king who challenges the diminutive boy to erect a temple in a single night or be put to death. The powerful little man ultimately completes 3 seemingly impossible challenges, kills the king, and becomes the new ruler of Uxmal.

Other Human Subspecies Connections Around the World

The Maya story about a little person using some other worldly or ingenious methods to create grand structures in a single night brings to mind the  Menehune who were the small archaic human subspecies inhabitants of Hawaii. These mysterious prehistoric people are said to have inhabited the Hawaiian Islands long before Polynesians arrived, and were responsible for the construction of the impressive and massive buildings like platform temples and artificial fishponds.

The Hawaiians believe that the Menehune would only come out at night to build these structures and their goal was always to complete construction in one single night. Similar to these other accounts, they would be easy to dismiss if it were not for physical evidence like the ruined temples and still functioning fishponds, just as the Maya story has its magnificent megalithic marvel.

Now onto the islands and inlets of the North Atlantic, Scandinavia, Ireland, Scotland, Iceland, all of which are equally filled to the brim with ancient accounts also attached to strange ruins.  Skara Brae  in Scotland for instance, comes to mind due to the measurements of the doorways and beds which all existed in underground dwellings. All of these North Atlantic regions have deeply engrained within them stylized recollections (mythology) of these prehistoric predecessors: elves, dwarfs, leprechauns, and many other human subspecies.

A Return To The Greeks For More About Little People

In Homer’s epic poem the  Iliad (eighth century BC), an ancient race of Pygmies, as the Greeks called them, were engaged in perpetual conflict with this species of cranes. Apparently, there was a queen of the little people named Gerana who offended Hera with her arrogance and claims of surpassing beauty, and as punishment this queen was then transformed into a crane which sparked the never-ending conflict between the two species:

“Now when the men of both sides were set in order by their leaders, the Trojans came on with clamour and shouting, like wildfowl, as when the clamour of cranes goes high to the heavens, when the cranes escape the winter time and the rains unceasing and clamorously wing their way to the streaming Ocean, bringing to the Pygmaian men bloodshed and destruction: at daybreak they bring on the baleful battle against them.”

The vast majority of the widely varied Native American tribes have oral traditions that recall coexistence between the Native Americas and a different, smaller, and more ancient, human subspecies. Common elements to these accounts include mischievous behavior like luring children into the forest by playing music.

Similar to the Greeks and North Atlantic people, the Native Americans believed that these little people lived in caves and could potentially be dangerous. For example, the Pryor Mountains of Montana are said to be home to this day of little people who the Crow tribe believe to be their sacred ancestors. The Crow are extremely weary and or cautious about entering into what they perceive to be the territory of the little people. Interestingly, the Pryor Mountains are a relative hotspot for strange phenomenon like disappearances, fairy rings, and reports of unusual sightings.

Remains of one of the most recently discovered early human species, Homo floresiensis (nicknamed ‘Hobbit’), have so far only been found on the Island of Flores, Indonesia. The fossils of H. floresiensis date to between about 100,000 and 60,000 years ago, and stone tools made by this species date to between about 190,000 and 50,000 years old. H. floresiensis individuals stood approximately 3 feet 6 inches tall, had tiny brains, large teeth for their small size, shrugged-forward shoulders, no chins, receding foreheads, and relatively large feet due to their short legs. Despite their small body and brain size, H. floresiensis made and used stone tools, hunted small elephants and large rodents, coped with predators such as giant Komodo dragons, and may have used fire.

The diminutive stature and small brain of H. floresiensis may have resulted from island dwarfism—an evolutionary process that results from long-term isolation on a small island with limited food resources and a lack of predators. Pygmy elephants on Flores, now extinct, showed the same adaptation. The smallest known species of Homo and Stegodon elephant are both found on the island of Flores, Indonesia.  However, some scientists are now considering the possibility that the ancestors of H. floresiensis may have been small when they first reached Flores.

Growing up in a culture so rich in fiction, it can be hard to distinguish between the fairytales we learn as children and what seems to be actual historical evidence that in the distant past there may have been diminutive species or subspecies of humans who perhaps lived simply but also built unimaginable monuments and may have been preyed upon by a giant species of bird.

It is not that all these myths are suddenly becoming valid, but it is possible that certain historical events continue to echo in the form of stylized recollections which we call mythology. It’s worth considering for a moment that below the surface of the earth are miles upon miles of uncharted, unexplored cave systems. It is estimated that less than 1 % of known cave systems have been mapped. 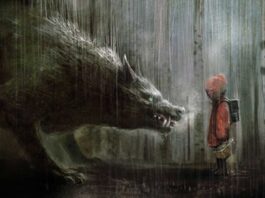 Who’s Afraid of the Big Bad Wolf? A Fearsome Beast in... 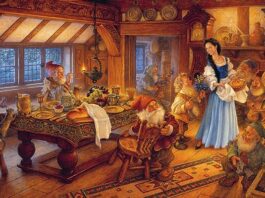 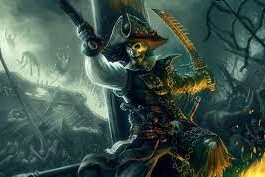 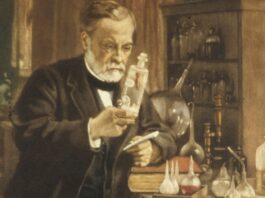 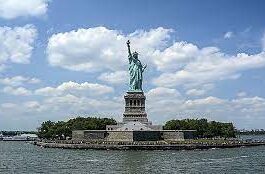 Things You Need to Know About the Statue of Liberty 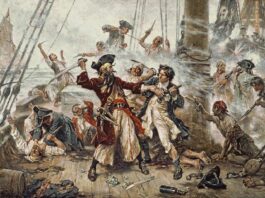 The Intricate World of Pirates, Privateers, Buccaneers, and Corsairs