The Kummakivi Balancing Rock and its Unlikely Explanation in Finnish Folklore 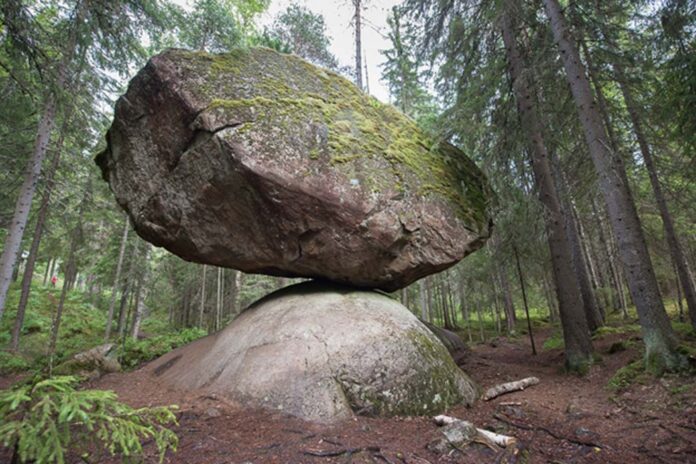 The Kummakivi Balancing Rock is a natural feature found in a scenic forest region of Ruokolahti, a municipality in the region of South Karelia, in the southeastern part of Finland. This feature consists of two boulders, one perched precariously on the top of the other. Although the upper rock looks as though it would roll off at any given moment, this has not happened. Additionally, if a human being were to apply force to the rock, it would not budge even the slightest bit.

The name of this Finnish balancing rock, ‘Kummakivi’, has been translated to mean ‘strange rock’. Two rocks make up this unusual geological formation. The rock on the bottom has the shape of a curved mound. It is lodged in the earth, and has a smooth, convex surface.

Resting on the top of this bedrock is another huge rock measuring about 7 meters long (22.97 ft). The contact point between these two rocks is rather small, and it looks as though the upper rock is performing an impossible balancing act.

Anyone looking at the Kummakivi Balancing Rock for the first time would probably be expecting the upper rock to roll off at any time. Yet the rock is firmly anchored onto the bedrock, and it has yet to be pushed over (or even moved slightly) by any human being.

The ancient inhabitants of this area, who no doubt were perplexed by the sight of this natural wonder, sought to find an explanation as to how this balancing rock came to be in such a baffling position. It is likely that this group of people tried to move the Kummakivi Balancing Rock with their own hands. Realizing, however, that the physical force that they applied to it failed to move the boulder, they speculated that a supernatural force must have moved it to the site.

The mythology of Finland is filled with supernatural creatures such as trolls and giants. Such creatures are believed to possess physical strength beyond that of any mere mortal. Moreover, some of these creatures have also been associated with rocky landscapes. For instance, a hiisi (‘ hiidet’ in plural) is a type of giant in Finnish mythology said to dwell in rocky landscapes.

Finnish folklore also states that such creatures have the habit of throwing boulders around, creating cairns, and carving out strange holes in rocky outcrops (which are believed to have been used by these giants to churn milk). Thus, the explanation provided by local folklore for the Kummakivi Balancing Rock is that it was brought / rolled / thrown there by a giant / troll.

Geologists, however, have provided an alternate explanation for the formation of the Kummakivi Balancing Rock. It has been speculated that the huge rock had been brought there by glaciers during the last glacial period. When the glaciers retreated from the area to the north, about 12,000 years ago, this rock was left behind, and hence became the Kummakivi Balancing Rock.

The Kummakivi Balancing Rock is not the only example of a balancing rock (also known as precarious boulders) in the world. Such rocks have been found in many countries around the world, and all are surrounded by colorful stories. In India, for example, there is a balancing rock called ‘Krishna’s Butter Ball’, a reference to an avatar of Hindu god Vishnu.

Apart from providing people with interesting stories, balancing rocks have also been used for more scientific purposes. In the USA, for example, researchers have used balancing rocks as a kind of natural seismoscope. While such rocks do not tell when earthquakes have occurred in the past, they are an indication that the region had not suffered from earthquakes strong enough to topple them.

Information about the amount of force needed to move these rocks can provide details on the magnitude of past earthquakes and the recurrence and intervals of large earthquakes in the area, which would be vital for probabilistic seismic hazard analyses. In other words, balancing rocks may save lives!

To conclude, the Kummakivi Balancing Rock is indeed a natural wonder to behold. While people in ancient times have attributed its formation to mythological giants, a more scientific explanation is available today.

The importance of this feature has been recognized and it was given protected status in 1962. Moreover, in the USA, balancing rocks have been used for seismic studies, and perhaps this balancing rock may prove useful for a similar purpose in the future too.

For a Metal or Forgotten Parents: The Mysterious Origins of Lake Titicaca’s Name