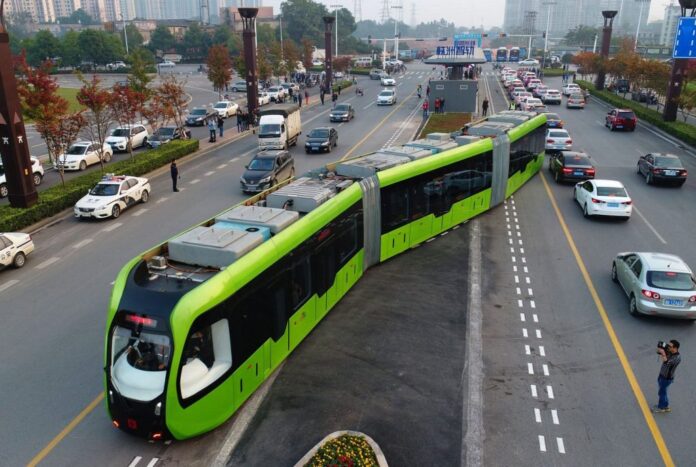 CRRC made it for public transportation as it can carry up to 300 passengers along complex city routes without the need to lay expensive tracks. The company revealed their design in June and started road tests 2 weeks ago in Zhuzhou, China.

It scans painted driving marks on the road to guide it instead of tracks. It made stops at 4 stations along a 2-mile city route. This all-electric vehicle is a major competitor for trains, buses, and even taxis because it’s like a mixture of each of them.

A 10-minute charge equals 15.5 miles of travel with a max speed is 43 miles per hour. This vehicle was designed to last for 25 years, so the city is investing in a self-driving mass transit future.

With more of these kinds of self-driving vehicles becoming popular because of their powerful, efficient, zero-emission electric turbines, and artificially intelligent computers, we may see a rapid change in not just transportation but in the entire civic engineering of modern cities.

Other cities may adopt such a solution to their growing population density where limited footprint and congested roads cannot fit a railway system. Just paint some new lines and hop on this “Rail-Bus” to beat the traffic.

The first Rail-Bus network system will open in China early next year.

Things You Need to Know About Charles Manson & His Cult

The Immense Collection of Strange Acambaro Figurines: Evidence of Dinosaurs Living Among Us?

Car Enthusiast? Here’s Everything You Need to Know to Explore the...