The Mysterious Wedge of Aiud 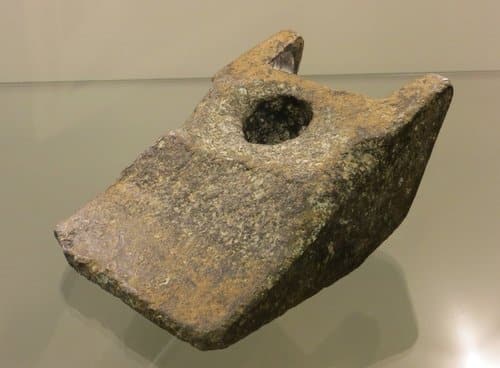 Archaeology has done wonders in providing answers for countless questions about our history that have been raised over the years; are still being brought up until now; and will continue to be asked even in the distant future. However, there are times when some archaeological discoveries that modern man have made ended up raising more questions about our past rather than answering them. Instead of explaining a mystery, an archaeological artifact can become an enigma by its own merits, and the mysterious aluminum Wedge of Aiud is certainly one of them.

The Aluminum Wedge of Aiud – also known as the Object of Aiud – is one of the most mysterious and controversial archaeological finds of our time. Depending on who you ask, this particular artifact can be a testament to a wild and out-of-this-world hypothesis, or it can merely be an item deemed dismissible for being just another fraud or fabrication. And so, it has become the subject of debate in recent years, with no possible resolution in sight in the foreseeable future.

DISCOVERY OF THE WEDGE OF AIUD

The discovery of the Wedge of Aiud dates back to 1973. As the story goes, builders worked on the shores of the Mures River, located not far from the central Romanian town of Aiud. Incidentally, they found three objects buried 10 meters or 33 feet under the ground.

From the perspective of the builders who found them, the items appeared to be unusual and also very old. And so, archaeologists were brought in to investigate the site. The two objects were identified as fossils, while the third item looked like a piece of man-made metal. The metal was very light, and at the time, it was suspected that it could be the end of an axe.

All three objects were sent to be further analyzed in Cluj, the main city of the Romanian region of Transylvania. It was soon determined that the fossils found near the town of Aiud belong to a large extinct mammal that perished some 10,000 to 80,000 years ago – the mastodon. However, for the third object, experts were stunned to find that it was a piece of a very lightweight metal which looks like it had been manufactured.

DESCRIPTION OF THE WEDGE OF AIUD

When the Wedge of Aiud was discovered, it was allegedly taken to the Archaeological Institute of Cluj-Napoca to be examined, where it was determined that it weighed 5 pounds, and measured 7.8 inches long, 4.9 inches wide and 2.8 inches thick. They were also able to discern its composition. The wedge is an alloy composed of 12 different elements. It contains 89% aluminum, as well as 6.2% copper, 2.85% silicon, 1.81% zinc, 0.0003% bismuth, 0.0002% silver, and trace amounts of gallium. The metallic item was also covered in a layer of aluminum oxide.

What’s interesting about the composition of the Wedge of Aiud is that metallic aluminum was not produced by mankind until around 200 years ago in 1825. And so, the discovery of the large chunk of metal some believed to be up to 250,000 years of age has since become a highly-sensational find.

IS THE WEDGE OF AIUD PROOF OF ANCIENT EXTRATERRESTRIAL CIVILIZATION?

The piece of metal discovered in Aiud has the composition and concavities that make it appear like it was manufactured as part of a more complex mechanical system. Hence, a heated debate has been going on, with one side speculating that the object is actually part of a UFO and serves as proof of visitation by an alien civilization in the distant past.

According to Gheorghe Cohal, the Deputy Director of the Romanian Ufologists Association, the lab tests conducted on the Wedge of Aiud allegedly concluded that the metallic object is an old UFO fragment since the substances it is made of cannot be combined with the technology available on Earth.

One of the experts who support the theory that the Wedge of Aiud is linked to an ancient alien civilization is Romanian ufologist Floring Gheorgita. She believes that the artifact landed on Earth with an alien spacecraft and that the wedge is actually a part of the spaceship’s landing gear. She is just one of many archaeologists and ufologists that share the opinion that the wedge is evidence of extraterrestrial activity and presence on our planet in ancient times.

And even if the wedge was not part of a landing gear of an alien spacecraft that had the ability to take off and land vertically, it is also possible that the metallic artifact was part of an ancient flying machine that was created right here on planet Earth.

SKEPTIC’S PERSPECTIVE ON THE WEDGE OF AIUD

While considering the Wedge of Aiud to be an evidence of an alien visitation during ancient times is a fascinating albeit far-fetched theory of its origin, there are, of course, more probable explanations.

One of the more likely explanations for the origin of the wedge is that it is nothing more than a modern-day aluminum excavator bucket tooth. In this scenario, a clamshell excavator could have been digging in the area, and a bucket tooth broke off. For some reason, that particular mining or excavation ended, and several years after that, the wedge was incidentally discovered, and those who found it was simply unfamiliar with excavator buckets. Thus, a mystery was born.

Another plausible explanation for the origin of the wedge was presented by Romania’s local historian Mihai Wittenberger. According to his theory, the discovered metallic object is actually just a metal piece from a German aircraft during the Second World War. He believes that it is a piece of a landing gear from a Messerschmitt ME 262.

Nigel Watson, author of the UFO Investigations Manual, also has a different theory on what the object found near Aiud could be. According to Watson, the Wedge of Aiud could be a wreckage of a satellite, which could explain why the discovery of the item was kept under wraps in 1973.

There are also scientists who are of the opinion that the Wedge of Aiud is actually fake. These skeptics believe that aluminum wedge was made on Earth by modern-day humans. The only difficulty is in identifying its purpose given the limited amount of information available about the object.

While the perspective of skeptics seems to provide more realistic theories about the origin and purpose of the Wedge of Aiud, the theories presented by these people are also largely based on conjecture. The theories of skeptics also fail to answer several pressing questions about the wedge, including providing an explanation regarding the age of the artifact.

For instance, the oxidized layer coating of the artifact had shown that is more likely to be around 400 years old, which is still a couple hundred years earlier before man was able to produce aluminum. If the Wedge of Aiud is nothing more than a modern-day excavator bucket tooth, a part of a German World War II aircraft, or a man-made satellite, then why is its estimated age date back to a time when aluminum hasn’t even been manufactured yet?

At present, the Wedge of Aiud is reported to be housed in the Museum of the History of Transylvania, and the mysterious story behind it still has no clear ending in sight. While there are perfectly logical explanations about this discovered artifact that lessens its mystical factor, this particular mystery remains truly unexplainable until now.

Is the Aluminum Wedge of Aiud really a relic of ancient visitation or prehistorical flying machines? Is it a modern piece of metal that found its way underneath the sands of Romania? Or is this just another deliberate hoax?

God’s Gate and the Sun Temple: A Mysterious Incan Portal Leading to Other Worlds

The Zapotecs of Monte Alban – The First Civilization in Western Mexico?